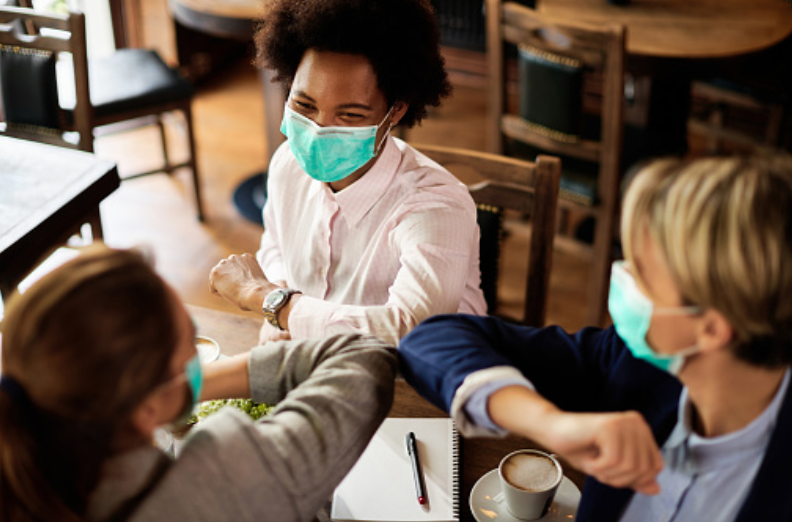 Researchers at the Technical University of Berlin have published calculations of the risk of infection for various indoor scenarios: from hairdressers and supermarkets to movie theaters and gyms. “The point is that we are now entering the loosening phases,” said study leader Martin Kriegel.

Multiple influencing factors taken into account
In the calculations, which were not peer-reviewed by independent experts and have not been published in a journal, Kriegel and his TU colleague Anne Hartmann focus on common places such as theaters, restaurants and schools.

Influencing factors taken into account are primarily the duration of the respective stay (estimated at one hour in the supermarket), the level of activity (high in the gym) and the air supply in the room.
Compliance with hygiene and ventilation rules is assumed, and the protective effect of a mask is included at 50 percent.
Further condition: An infected person is in the room with others.
Risk of infection in the supermarket, office and theater
Under the set conditions the risk is comparatively small with the hairdresser, in less busy museums, theaters and cinemas, in addition, in supermarkets. It is significantly higher in gyms and especially in high schools and multi-person offices, he said.

“It is of great interest to compare typical situations to get a general impression,” Kriegel says. At the same time, he acknowledges, “It’s a simple estimation model, but it’s based on a detailed infection risk model validated on real outbreaks.”

Still, he says, fundamental medical questions remain unclear, such as how many viruses are in aerosol particles and what virus concentration is needed for infection. “You would need more interdisciplinary collaboration to get a comprehensive, holistic model.”

The real world is just more complex. Gerhard Scheuch, former president of the International Society for Aerosols in Medicine, urges caution in interpreting the results: Only part of the multitude of influencing factors is known so far, he said, and the study presupposes many assumptions. “Such calculations are incredibly complex.” The results, which indicate the risk very precisely, give the impression of a precision that does not exist.

Risk of infection very high in closed rooms
Chemist Jos Lelieveld emphasizes the comparative juxtaposition of scenarios. “The message is actually simple,” explains the director at the Max Planck Institute for Chemistry in Mainz.

“If a group of people spend a long time in a closed room with an infected person, the risk of infection is very high. Over several hours, the virus-laden aerosols accumulate, and the infectious dose can be reached.”

This is true, he said, for high schools, for example, for which the risk can be easily mapped given comparable class and room sizes. The risk in offices is also clear, he said. “These statements are correct and important,” Lelieveld emphasizes.

“The public should understand that they are taking a high risk by opening schools.” He also says the home office portion of the profession still has a lot of room for improvement.

No accurate data for restaurants and fitness centers
Lelieveld is critical of other statements in the study – such as the risk in indoor swimming pools, which Kriegel’s study found to be significant. Lelieveld declined a request from a swimming pool association to calculate the risk of infection. “For that, you would have to simulate aerosol flows well for the large halls,” he says.

“We can’t do that.” Accurate data for restaurants and gyms are also difficult, he said: “I wouldn’t support those statements that way.”

Physicist Eberhard Bodenschatz of the Max Planck Institute for Dynamics and Self-Organization in Göttingen emphasizes that it is relatively easy to estimate the probabilities of infection under given conditions. However, it is important to consider all contingencies.

For example, if people who would have been in contact with each other anyway arrange to meet in a restaurant, it could be that the whole group is infectious without knowing it. In that case, the probability that other people will be infected via infectious aerosols is much higher than, for example, at the hairdresser’s, which customers usually visit independently of each other.

Regardless of the location, he said, the risk depends enormously on one factor: the prevalence of the virus in the population. “If the prevalence decreases, the probability that there is an infected person in a room at all also decreases.”

That’s why Bodenschatz welcomes the recent decision by Germany’s federal-state conference to consider relaxing Corona measures only when the number of new infections reaches 35 per 100,000 inhabitants within seven days. “Actually, the incidence should be pushed down as far as it somehow can be.”

The experts stress that policy decisions also depend on many other factors. Study author Kriegel does not want his calculations to be taken as a prescription to policymakers regarding possible relaxations. “I don’t want to make recommendations,” he stresses. “We are providing information. We are not involved in the decision-making processes.”