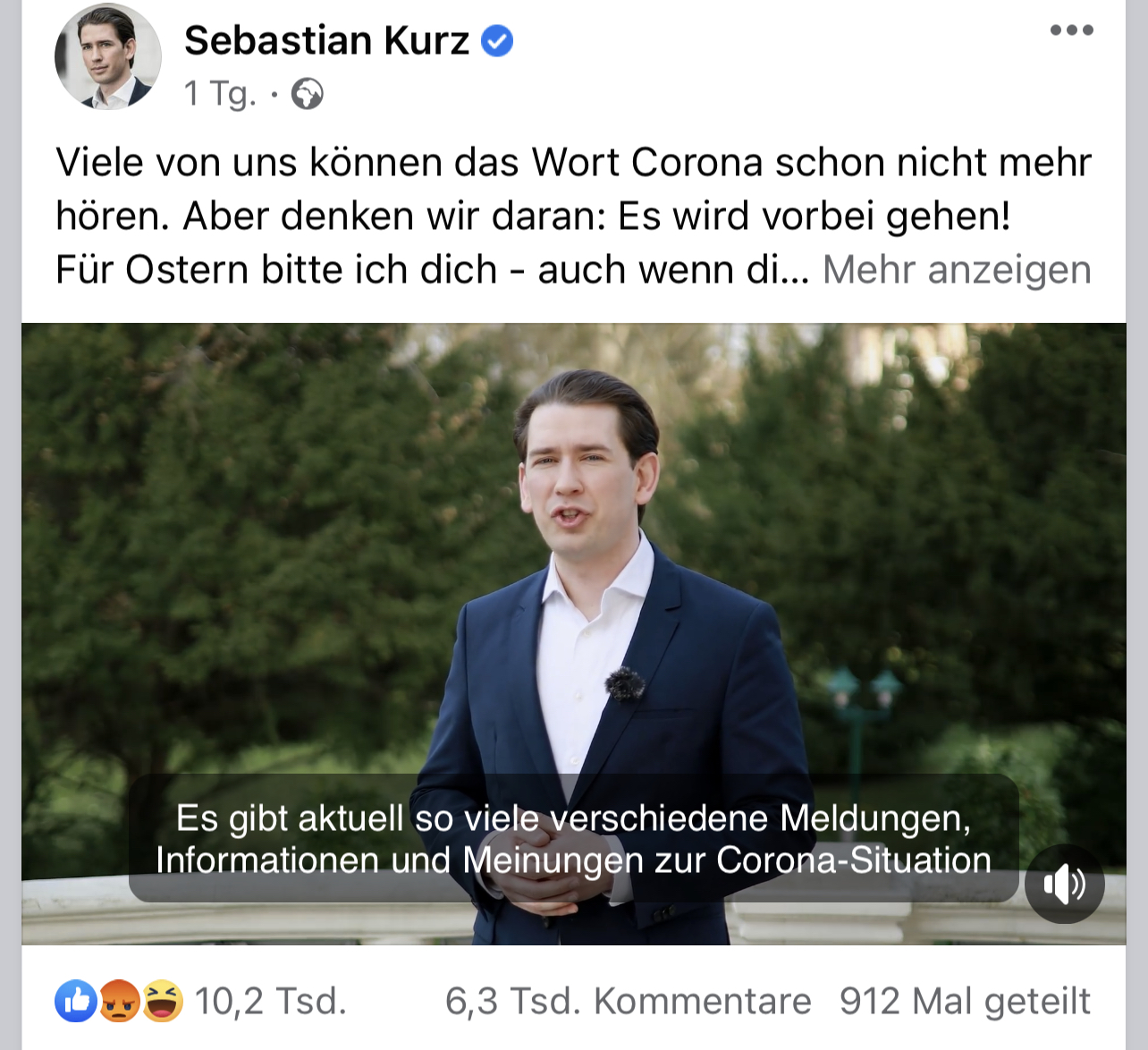 Chancellor’s Easter message: in May, the elderly population should be vaccinated and openings should be possible. In 100 days, everyone who wants a vaccination should get one.

“There are currently so many different messages, information and opinions,” Chancellor Sebastian Kurz introduces his Easter message, which was published on Facebook on Holy Saturday.

Vaccinations are progressing well, Kurz says. Austria is among the top 10 in Europe and in the top 20 worldwide, he said.

And although some vaccine manufacturers are delivering only half of what is contracted with the EU, Kurz notes, “in the next 100 days we will have the opportunity to offer at least the first vaccination to everyone who wants to be vaccinated.” If Sputnik, the Russian vaccine, is used, he said, that could even be accelerated.

What makes national approval for Sputnik V difficult
The plan: to vaccinate everyone over 65 in April, then everyone over 50 in May. In June, all other age groups are to get the opportunity, “so that we can get back to normal in the summer,” Kurz says.

The time until then, however, will remain a challenging one and difficult to predict. The goal, he says, must be to prevent intensive care from becoming overburdened.

In Vienna, Lower Austria and Burgenland, the situation in the hospitals is very tense, so drastic measures are needed there. The three states are in lockdown until April 11. In the rest of Austria, the situation is “currently a much better one,” Kurz says. “That’s why we will try to continue to get by with the existing measures.”

Every vaccination that is carried out, he says, helps to ease the overall situation in the country. And the chancellor also gives a time horizon for this: “We expect to reach a turning point as early as May through the vaccination of the elderly, and we will finally also be able to set the opening steps that we all expect so urgently.”

He is like everyone else in Austria in this regard, he emphasizes: “I am eagerly waiting for us to finally be able to experience sports, culture, gastronomy and tourism in Austria again.”

As chancellor, he also longs for this day, because then hundreds of thousands of people from these industries will be able to work again and the businesses will no longer be dependent on state support.

But, “Until that day comes, we have to accept the things we can’t change.” For Kurz, these include not only the currently rampant viral mutations, but also the fact that vaccines that were contractually promised would not be delivered.

Austria is in the “privileged situation” that there are sufficient FFP2 masks and a free test offer for everyone, he said. “Take advantage of this offer,” Kurz appealed to the population. Every test not only protects oneself and one’s environment, but also helps to keep the overall incidence of infection under control, he says.

At the end of his message, the chancellor once again finds encouraging words for the population: “As always in life, the most important thing is the inner attitude. And precisely because all this is already dragging on so endlessly, because many of us rightly can no longer hear the word ‘Corona’ and it all seems almost unbearable, it’s important to keep reminding ourselves that Corona will eventually pass.”

Easter in particular, Kurz said, is after all the “festival of hope.”

Health minister cautious
“It is important to make a perspective visible,” said Health Minister Rudi Anschober in a reaction to Kurz’s speech on Ö1’s midday journal. Yes, he said, there was a chance of creating openings in May, but, he cautioned, “for that we need a good April.” New infections are still far too high, he said. “If we are consistent and solid now, we will manage to open in May.”

Intensive care units in eastern Austria are under dramatic strain, he said. “We need the solidarity of other federal states to take over patients from eastern Austria,” Anschober said. This will also be a topic at the next summit meeting on Tuesday, he added.

Regarding vaccinations, Anschober sees Austria on a very good path. Regarding the Russian vaccine Sputnik, one would first have to fully concentrate on quality assurance. “That must have priority.”