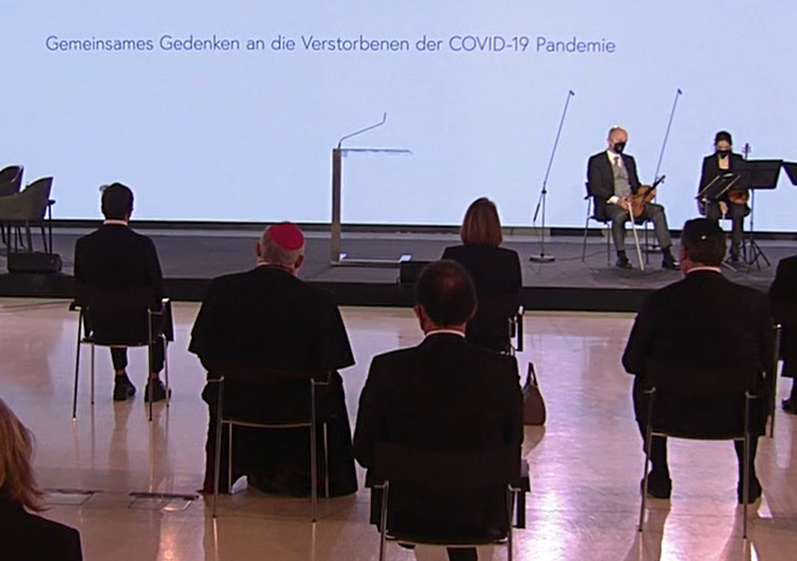 The leaders of the state, churches and religions held a joint memorial service on April 16, 2021, to commemorate the nearly 10,000 people killed so far in the Corona pandemic in Austria.

At the commemoration, which was broadcast live on TV on Friday, Federal President Alexander Van der Bellen spoke movingly of the fact that many people had to die alone, and spoke of the pain of “unfinished farewells” and the need to mourn together. In view of the pandemic and its victims, Chancellor Sebastian Kurz appealed to “overcome rifts, reach out to one another and reconcile.” Five representatives of the churches and religions in the country offered prayers.

Cardinal Christoph Schönborn, the Orthodox Metropolitan Arsenios (Kardamakis), the Protestant Bishop Michael Chalupka and the presidents of the Islamic and Jewish religious communities, Ümit Vural and Oskar Deutsch respectively, prayed for the victims, the bereaved, the sick and the health personnel. Cardinal Schönborn expressed the Christian certainty that God is close to people. He concluded the prayer with the request that “the Eternal Light shine” on the deceased. Bishop Chalupka spoke in the prayer of the need to give space to suffering and groaning, as well as the Christian confidence that no one can fall deeper than into God’s hand.

The representative from the nursing sector explicitly told how much it had helped relatives and nursing staff that there had been a funeral service in her facility with a Catholic deacon for all those who had died.

During the mourning ceremony, which was broadcast live by ORF 2, three relatives lit candles in memory of the deceased on behalf of all surviving relatives. The ceremony was moderated by Claudia Stöckl, who began by quoting St. Augustine: “Our dead are not absent, but only invisible. They look with their eyes full of light into our eyes full of sorrow.” The ceremony in the Aula der Wissenschaften in Vienna was framed by a string quartet of the Vienna Philharmonic Orchestra. Flags were flown at half-mast on the buildings of the Hofburg, the Federal Chancellery, the Foreign Ministry and the Parliament.