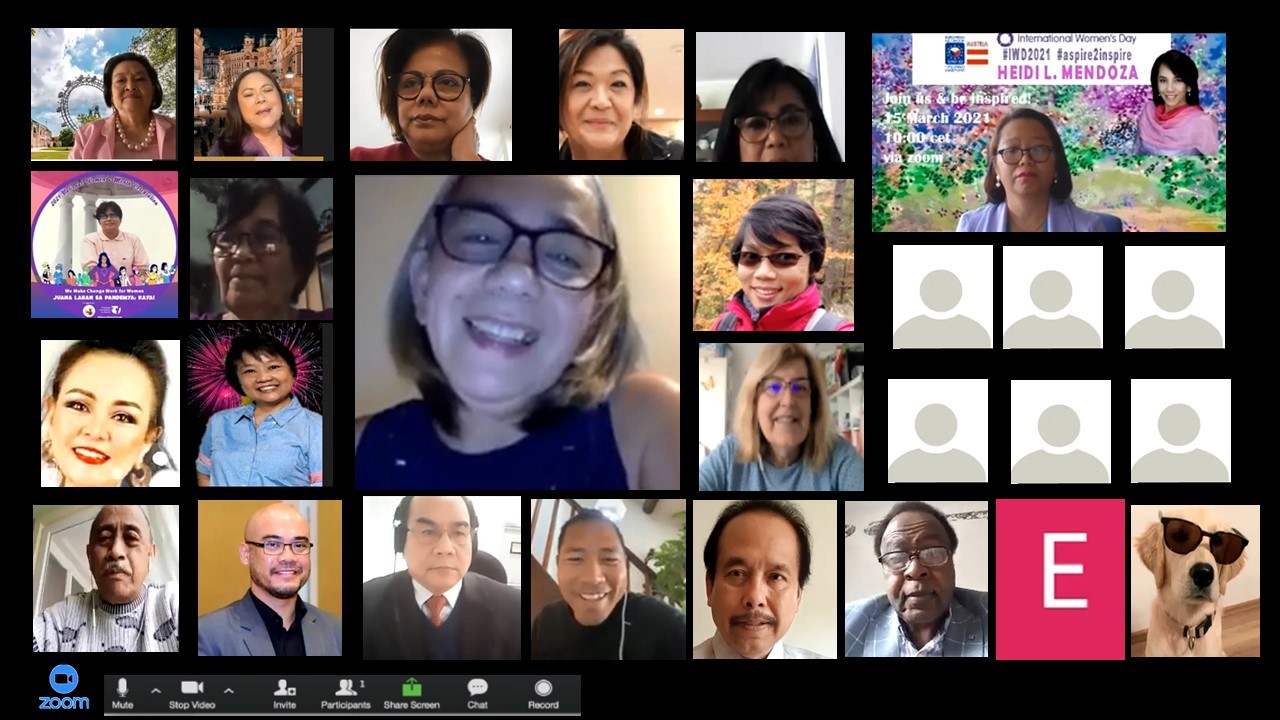 Vienna, 15 March 2021 – In the margins of the celebration of Women’s Day this year, the European Network of Filipino Diaspora Austria (ENFiD-Austria) organized the #aspire2inspire virtual presentation of former United Nations Under Secretary General (UN USG) for the Office for International Oversight Section (OIOS) on “WIFE ON THE EDGE: a deliberately funny but unassuming story”.

The presentation was very personal in which former UN USG Mendoza shared her life which she said is also her profession.  Starting with a statement that “Audit is like a box of chocolates, you never know what you gonna get” she continued sharing anecdotes from audit assignments which she considered as  missions. UN USG Mendoza reiterated that “there is no passion to be found in settling for a life that is less than the one you are capable of living.”

Consul General Deena Joy Amatong, Chargé d’ Affaires a.i. (CDA) and Deputy Chief of Mission (DCM) of the Embassy of the Philippines in Austria delivered a message, which in itself was an inspiration to the Filipino community in Austria. Stating that former UN USG Mendoza remains to this day the highest ranking official to serve in the UN, who has dedicated decades of her life to public service, she lauded her dedication to her work, her courage which serves both as inspiration and aspiration. She ended her message by congratulating all women attendees for holding up half the sky.

ENFiD-Austria is one of the 17 members of ENFiD. Established on 15 October 2017 with eight members, it is one of the most active organization in Austria, spearheading numerous events, albeit virtual, in keeping with the existing health protocols in Austria and launching projects such as its “Recipes for Keeps cookbook”, the proceeds of which are sent to beneficiaries in the Philippines. The activities and projects are in line with its advocacies and the 4E Programmes: (1) Education and Learning (2) Embracing the Environment (3) Elevating Arts, Culture and Sports and (4) Empowering Euro Filipino Youth.

“ENFiD is a fast-growing Europe-wide cross-sectoral, all-inclusive overseas-Filipino platform in Europe that has genuine developmental ambitions translated into timely and relevant actions for Euro-Filipinos and the Philippines. It is a non-political, non-sectarian and not-for-profit network. It comprises members from different sectors of the society, including all political leanings. ENFiD’s foundations are formulated in its Constitution. It provides a forum for regional and global interaction between and among Filipino individuals and organizations within the European Community, with Philippines and with the rest of the world. It inspires and initiates non-partisan dialogues and discussions on relevant topics and participates in the international dialogue on ethical, cultural and political issues with a view to alleviate global poverty.” Source: http://enfid.org/