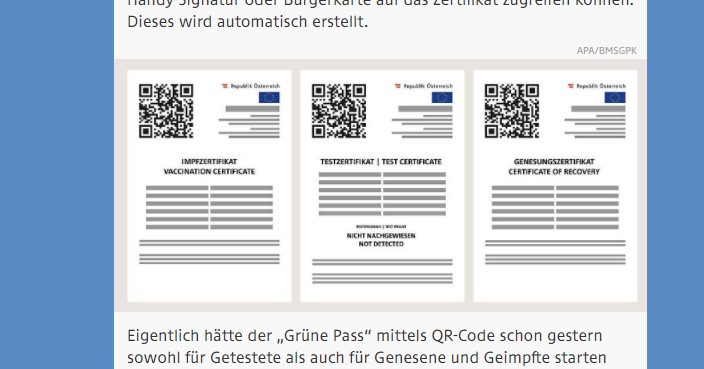 The first of the approximately 300,000 “recovery certificates” for the “Green Passport” are now ready for download. One is “in the last breaths” as it was said on the part of the health ministry as published by orf.at

Soon, any person who has survived a Covid 19 infection in the past six months should be able to access the certificate via Gesundheit.gv.at using a cell phone signature or citizen card. This will be generated automatically.

Actually, the “Green Passport” by means of QR code should have been launched yesterday for those who have been tested as well as for those who have recovered and been vaccinated – the Ministry of Health explained that there were delays here with the high standards that had to be met – the “Green Passport” had to “work for everyone. Safe and free.”

First tested, then recovered, then vaccinated.
The official test results, produced for example by test roads or pharmacies, were already produced yesterday in the EU-compliant format and initially still sent by mail or SMS, but already with QR code. For tested people, the test result is shown on the certificate with the terms “detected” or “not detected”. This means that an infection with the coronavirus is given in the first case and was not detectable in the second. With these terms (not detected), Austria follows the corresponding EU directive.

The recovery certificates contain the date of the first positive test as well as the date from which the certificate is valid or the six months thereafter until the end of validity. Within Austria, as in previous weeks, the certificates continue to count as entry tests for gastronomy, culture, etc. In addition to the new certificates, the previously used proofs in analog or printed form also remain valid.

The Ministry of Health confirms that the vaccination certificates in the EU standard will be added “in a next step”. A concrete date is still not mentioned, but it should be at the latest with the EU-wide introduction of the “green passport” with 1 July so far. However, digital proof of vaccination can already be created and downloaded from the e-vaccination passport – at Gesundheit.gv.at – using a cell phone signature or citizen card.