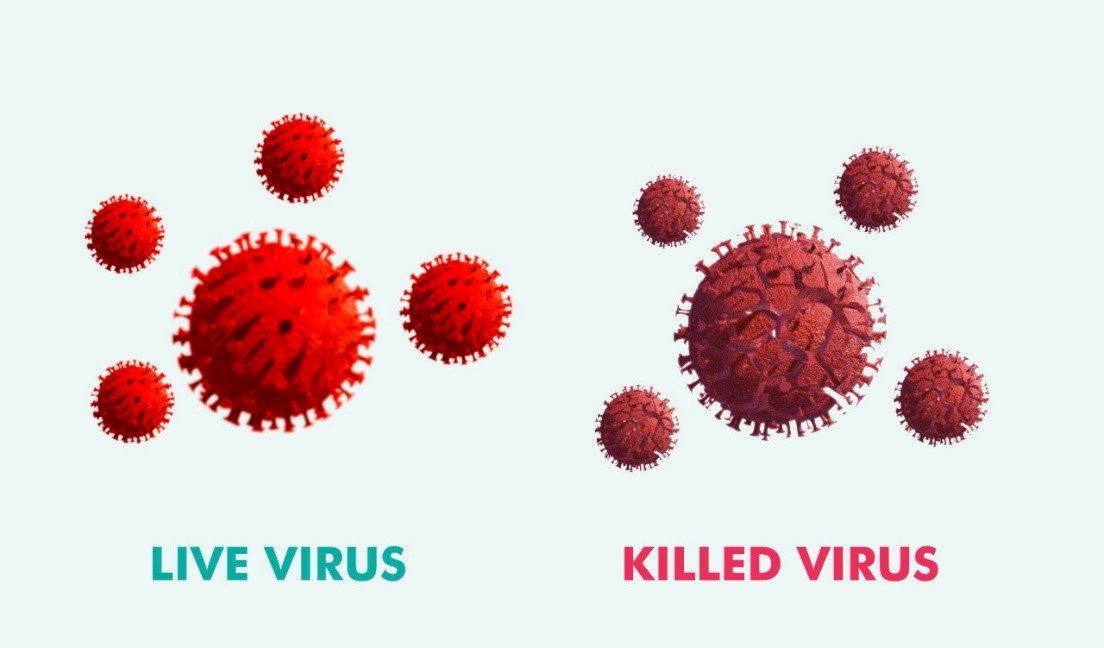 What exactly are dead vaccines and how do they work?

Related to Covid-19, four vaccines are licensed in Europe, of which two are vector vaccines (Astrazeneca and Johnson & Johnson) and two are mRNA vaccines (Biontech and Moderna). A protein vaccine candidate, Novavax of the U.S., is under development and has been under rolling review by the EU Medicines Agency (EMA) since March 2021.

What are inactivated vaccines and for which diseases are they used?
As their name suggests, dead vaccines – or inactivated vaccines – contain killed pathogens or only components of the pathogens. They can no longer reproduce or cause disease. The dead pathogens or fragments are recognized by the body as foreign bodies. For most dead vaccines, an effect enhancer is still needed because the killed pathogens alone are not sufficient to trigger an immune response. The recognized foreign bodies stimulate the body’s own defense system to produce antibodies without actually causing the disease.

Most vaccines belong to the category of inactivated vaccines, including most influenza vaccines. Furthermore, vaccines against diphtheria, hepatitis B, polio (infantile paralysis), whooping cough, tetanus and rabies, among others, belong to this category.

What is the difference between mRNA and vector vaccines?
The mRNA vaccines (mRNA stands for messenger ribonucleic acid) confront a few body cells with parts of the genetic information of the virus, which is stored in the mRNA. This provides the blueprint for individual harmless viral proteins called antigens. The antigens in turn activate the immune system and, if successful, elicit the protective immune response.

The principle of the vector vaccine was first used as a tolerable and effective vaccine against Ebola. An attenuated virus that is harmless to humans serves as a means of transport (vector) for a harmless part of the genetic information of the coronavirus. Vector vaccines contain the blueprint for one or more antigens that activate the immune system. Astrazeneca’s vaccine addresses this in the same way as mRNA vaccines.

What both types of vaccine have in common is that they contain genetic information with the blueprint of the spike protein. This protein molecule sits on the surface of the coronavirus and allows it to dock onto human body cells. Vaccination stimulates the cells at the injection site to produce this spike molecule for a short time. The immune system responds to this, retains the spike protein in memory, and is prepared for defense when later confronted with the real virus.

Advantages and disadvantages of inactivated vaccines
Inactivated vaccines are produced using a proven, but by no means simple, method that allows large quantities of vaccine to be produced relatively quickly. Another advantage is their long shelf life. They can be stored at refrigerator temperatures of two to eight degrees Celsius for several years and used at room temperature for up to 24 hours. This makes them ideal for administration in remote parts of the world.

Inactivated vaccines are less likely to have side effects per se, but vaccine protection generally wears off over time, unlike live vaccines. A booster is necessary in some cases after a few years. For TBE, for example, this is the case after three to five years, depending on age. In the case of other diseases such as diphtheria or tetanus, renewed vaccination is only necessary after five to ten years.

In the case of SARS-CoV-2, these vaccines require an enhancer to elicit an immune response. This can trigger flu-like symptoms. In principle, however, inactivated vaccines are well tolerated – by all age groups and also by high-risk patients. And this could also help vaccination skeptics who may still be afraid of the relatively newly developed mRNA vaccines – dead vaccines have been around for a long time and are known from various other vaccinations.

However, they also have in common (especially those from China) that they perform worse in efficacy tests than the mRNA vaccines – especially also against the new virus variants. This could be due to the fact that with mRNA vaccines, the cells themselves begin to produce virus components. These activate the immune system to produce antibodies extensively. This does not happen with the inactivated vaccines.

What are the candidates and where are inactivated vaccines already being used?
Currently, four inactivated coronavirus vaccines are already being vaccinated around the world – some only in certain countries. Others are still in the clinical trial phases. Chinese companies Sinovac (with the CoronaVac vaccine) and Sinopharm have both already developed dead vaccines.

Sinopharm already has two vaccines on the market, BBIBP-CorV and WIBP-CorV. The latter has full marketing approval in China since February 2021 and emergency approval in northern Macedonia, Peru, the United Arab Emirates and Venezuela. WIBP-CorV is 72.8 percent protective against symptomatic courses and 100 percent protective against severe courses.

With BBIBP-CorV, Sinopharm was the first Chinese pharmaceutical company to receive WHO approval for a Corona vaccine – on May 7, 2021, the vaccine received emergency approval and has since been vaccinated as part of the Covax program, which aims to provide vaccine to poorer countries. The vaccine has full market approval in Bahrain, the Seychelles and the United Arab Emirates, in addition to China, and emergency approval in more than 80 countries.

Sinovac may have hopes for approval of its vaccine in the EU. On May 4, the EMA initiated a rolling review process. The vaccine has been approved in China since February 2021. The WHO granted approval to CoronaVac on June 1, 2021. The vaccine is now used in more than 50 countries, including Chile and Botswana.

BBV152, or Covaxin, was developed by Indian company Bharat Biotech and the Indian Council of Medical Research. The vaccine received emergency approval in India in early January 2021, although the Phase III clinical trial had not been completed, leading to increased criticism. Nevertheless, the dead vaccine is being used in 20 countries worldwide.

How is the dead vaccine development in Europe?
French-Austrian manufacturer Valneva, with its vaccine candidate VLA2001, started Phase III trials in April 2021 and could make it to Europe first. It is also currently the only European candidate when it comes to inactivated vaccines. An effect booster must be added to this – in the case Alum (aluminum hydroxide) and CpG 1018. Two vaccine doses of VLA2001 are also needed, 28 days apart.

A comparative study with Astrazeneca is currently underway in the UK with 4,012 participants aged 18 years and older. On September 13, 2021, the UK government withdrew its order with Valneva – an order for 100 million Corona vaccine doses. The UK government had cited that Valneva had not fulfilled its obligations. Valneva denied the allegation without elaborating.

On Oct. 18, French-Austrian Valneva announced “positive initial” results from the Phase III clinical trial of its coronavirus vaccine candidate. Compared with the Astrazeneca vaccine, subjects were found to have a higher mean level of neutralizing antibodies, the company said. The agent was also “generally well tolerated.”

In another parallel Phase III trial, which was started in August 2021, a different viral variant is being tested in New Zealand as a baseline and compared with the original one. The main aim here is to investigate the efficacy in older people. This works well in New Zealand, where vaccination rates are still relatively low and enough test subjects can be found in all age groups.

However, it should also be mentioned at this point that the vaccines approved to date in Austria and in other parts of Europe have been thoroughly tested and are safe, as well as providing protection against a severe covid 19 course. Also with the mRNA vaccines, more than 300 million people worldwide have been fully immunized in recent months. “There is hardly any vaccine that has been studied as well and as broadly as mRNA vaccines have been in the meantime,” says virologist Ulrike Protzer of the Technical University of Munich.