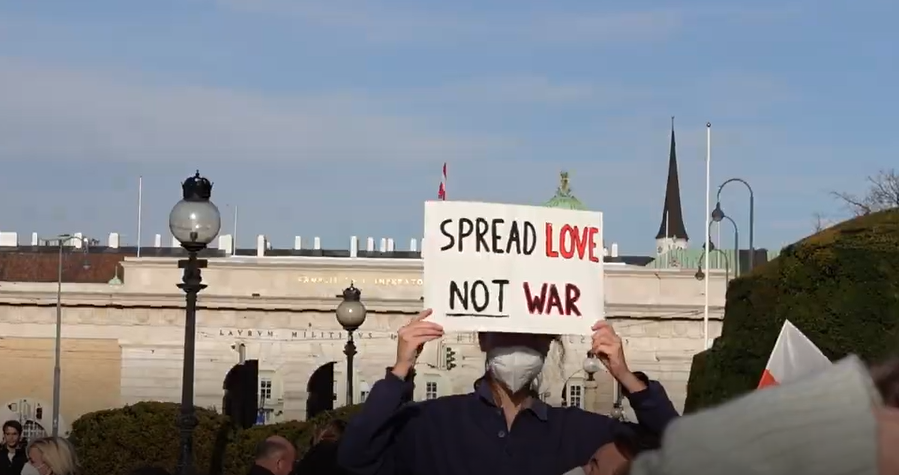 Around the world, countless people took to the streets again on Saturday to demonstrate against Russia’s war of aggression in Ukraine and show solidarity with the country’s people under attack. In Bern, up to 20,000 demonstrators were counted demanding a more rigid stance by Switzerland against Russia, and in the Finnish capital Helsinki, more than 10,000 people took to the streets. There were also demos in Vienna, Graz, and Linz.

Several hundred people demonstrated in New York’s Times Square on Saturday afternoon (local time) against Russia’s war of aggression in Ukraine. Photos showed people carrying Ukrainian flags and signs reading, among other things, “Stop Putin – Help Ukraine.” Smaller protests were reported in other U.S. cities, including outside the White House in Washington. On Saturday night, the Empire State Building in New York had already been illuminated in the Ukrainian colors of blue and yellow as a gesture of solidarity with Kyiv.

Outside the United Nations European headquarters in Geneva, some 1,000 people gathered in front of a monument to civilian victims of war. Thousands of demonstrators in other cities in Switzerland also called for a tougher stance by their government toward Moscow. In Bern, for example, up to 20,000 demonstrators were counted. In Russia’s neighboring country of Finland, more than 10,000 people demonstrated in the capital Helsinki, chanting “Russia out, down with Putin!”

Thousands of people also protested in several German cities. In Munich alone, there were 5,000 people, according to police. In Frankfurt, police spoke of 6,000 to 7,000 participants in a rally under the slogan “Solidarity with Ukraine – Peace in Eastern Europe.” In Düsseldorf, just under 4,000 people gathered in the afternoon, according to police. The opposition CDU called for a vigil for Ukraine in Berlin for the evening.

In Rome, thousands of people participated in a march to the Colosseum on Friday evening. On Saturday, more than 1,000 people demonstrated again in the Italian capital.

In London, hundreds of demonstrators marched to the Russian Embassy, participants of the protest smeared the street sign of “St. Petersburgh Place” in front of the embassy with fake blood. In the Georgian capital of Tbilisi on Friday evening, nearly 30,000 people had demonstrated Ukrainian and Georgian flags and sang the national anthems of both countries. Solidarity with Ukraine is powerful in that country, where the war brings back memories of the Russian invasion in 2008.

In Argentina’s capital Buenos Aires, nearly 2,000 people marched in a protest to the Russian Embassy on Friday night, demanding the withdrawal of the Russian army from Ukraine. In Montreal, Canada, dozens of protesters braved a snowstorm to demonstrate against the war. Protests were also held in Taiwan and Brazil, among other places.