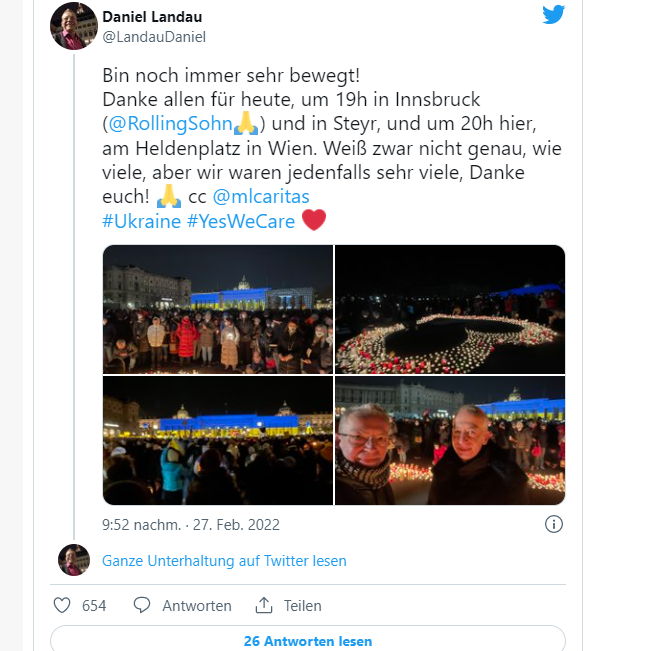 On Sunday evening, thousands of demonstrators gathered at Vienna’s Heldenplatz to express their solidarity with Ukraine in a sea of lights organized by the #YesWeCare initiative.

With the Outer Burgtor, the first federal building in Vienna was also draped in the Ukrainian national colors of blue and yellow.

Sea of lights for Ukraine in Vienna

“The war was there, and it was relatively clear that we wanted to do a ‘#YesWeCare’ also for the situation in Ukraine,” organizer Daniel Landau said. He said he knew that many people in Ukraine would be very aware of these signs around the world. He said the event was a protest, a call for peace, and a clear indication of an aggressor.

“It is important in times like these to say to all people in Ukraine and all with family in Ukraine: you are not alone,” SPÖ leader Pamela Rendi-Wagner, who was also present, stressed in response to an APA query. Referring to a statement by UN Secretary-General António Guterres in this regard, the politician pleaded for giving peace a chance. However, this change seems to be very small at the moment.

Quiet and loud protest at Heldenplatz in Vienna

While several hundred people standing around a heart made of candles listened at first somewhat affected to some interpretations of the Viennese pianist and singer Paul Gulda, representatives of the Ukrainian diaspora again expressed their loud protest. They chanted their familiar Ukrainian slogans, which increasingly attracted the interest of non-linguistic Austrians.

The Ukrainians, in particular, had also brought numerous posters with them, including one of the day’s news. A young woman held up a cardboard box with the slogan, “You may have destroyed our Marija, but will only destroy our dream.“ On Sunday, it had become known that in the course of war actions, the largest transport aircraft in the world, a grounded Antonov type An-225 Marija, was destroyed outside Kyiv. “Marija” is the Ukrainian word for “dream.“

Chancellor Nehammer said in a tweet: “Today we are setting a visible sign of solidarity with the Ukrainian people. The Federal Government – in consultation with Federal President @vanderbellen – illuminates the Heroes’ Gate in Vienna with the national colors of Ukraine blue & yellow. #yeswecare #allforpeace”.