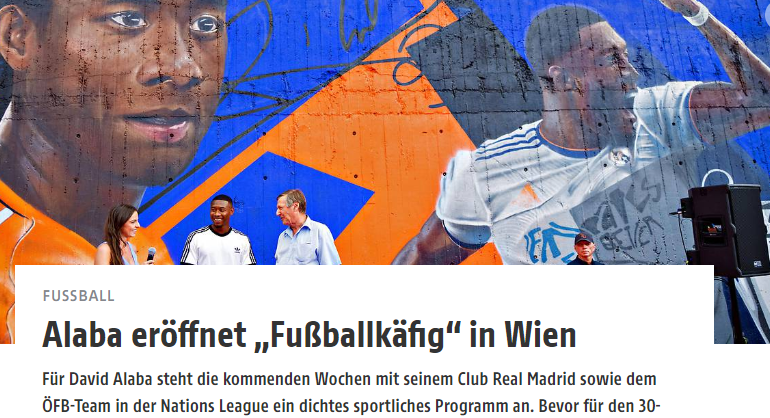 On Monday afternoon, Austrian international soccer player David Alaba joined the City of Vienna and its partner Adidas to open a soccer cage in Vienna’s Arenbergpark.

It was an “emotional day” for the 30-year-old footballer as he leaped into the big soccer world, starting from the City of Vienna’s soccer pitches.

Opening of David Alaba’s soccer cage in Vienna’s Arenbergpark.
Several hundred children, young people, and adults gathered some time before the official celebrations began to witness the opening of the new soccer cage in Vienna’s third district, Landstraße, together with their idol David Alaba. In addition to a small ceremony at the beginning, the event’s highlights included unveiling the mural and a small “Kicker,” in which the Real Madrid professional participated. In the end, the 30-year-old footballer fulfilled fans’ numerous autograph and photo requests.

Alaba often played in soccer cages in Vienna during his childhood.
Alaba himself kicked almost every afternoon in his childhood and youth in a soccer cage in Vienna. This is another reason why the opening in Arenbergpark Vienna was an emotional affair for him. “I grew up in such cages. That’s where my path began. Now to stand on this pitch is very special,” Alaba told Austria Presse Agentur. When he entered the football field, he said, he could recognize his “young self” in the children and remember back to that time.

Unveiling of the mural in Vienna’s Arenberg Park
A special moment was the unveiling of a mural in Vienna’s Arenbergpark. This work of art is located directly next to the outline of the pitch on the wall of a bunker, is 30 meters wide as well as eight meters high, and depicts the individual career steps of the three-time Champions League winner. From the professional beginnings with the Vienna Austria over the highly successful time with FC Bayern to the current station Real Madrid and the numerous assignments in the Austrian national team. Alaba had felt “goosebumps” at the unveiling.

Match with David Alaba in Arenbergpark Vienna
Meanwhile, the new football pitch was also inaugurated right away. In a 12-minute match, the Real Madrid pro competed with friends against a selected team in Vienna’s Arenbergpark. Alaba promised to drop by this court himself once or twice in the future to “gamble” a bit with his boys. Otherwise, the cage will be used primarily by the city’s young sports enthusiasts. “I want it to be a lively place where children have the opportunity to live out what they aspire to and dream of,” Alaba stressed.