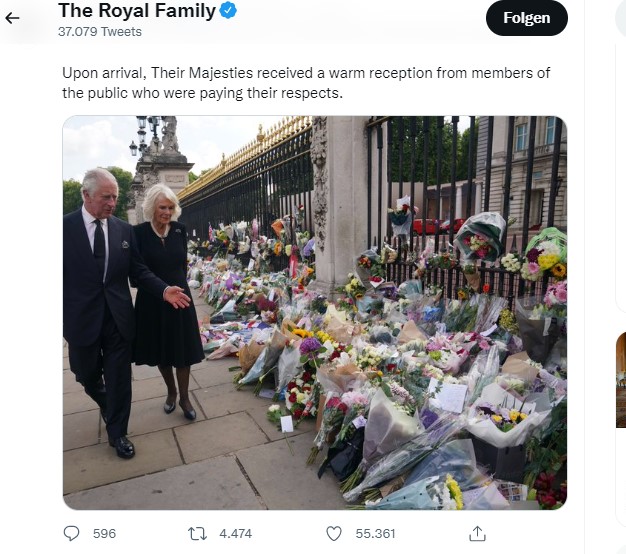 The new King Charles III has renewed his mother’s promise of lifelong service to his people. The 73-year-old said in his first address to the nation this Friday as the new monarch. He also named his son and heir to the throne William as the fresh Prince of Wales and his wife Kate (both 40) as Princess of Wales.

His mother had once promised to devote “her whole life, may it be short or long,” to the service of her subjects. Charles said that she had kept that promise, and he now wanted to renew it.

Charles also addressed his late mother directly. “Dearest Mom, as you begin your last great journey to my dear late dad, I just want to say one thing: Thank you,” he said Friday night in a pre-recorded speech. “Thank you for your love and devotion to our family and all the nations you have served diligently over the years.”

With the death of Queen Elizabeth II on Thursday, Charles, 73, became Britain’s king. He knew and shared great sadness in his country and around the world at his mother’s death, he said. “Affection, admiration, and respect” had become the “hallmark” of her reign. Every member of his family can attest that the Queen combined this with “warmth, humor and an incorruptible ability to see the best in people,” the monarch said.

It has been a privilege to hold the title “Prince of Wales” himself, Charles said Friday night in his first televised address to the nation. He said he was sure that William, 40, and his wife Kate, 40, would continue to inspire British society and lead national debates as Prince and Princess of Wales.

Charles also directed conciliatory words to his younger son Harry (37) and his wife Meghan (40). “I also want to express my love for Harry and Meghan as they continue to build a life overseas,” the king said.

Harry and Meghan had broken away from the royal family’s inner circle more than two years ago and now live in the U.S. state of California with their children Archie, 3, and Lilibet, 1. Charles and his older brother William Harry had fallen out with his father.

Charles III will be officially proclaimed as British king this Saturday. Members will inform the Crown Council, which is mainly comprised of active and former members of the government, church representatives, judges, and other public figures. The council will meet at 10 a.m. (11 a.m. CEST). Also, on Saturday, Charles is scheduled to meet with Prime Minister Liz Truss and the Cabinet.

The king replaces his mother as chairman of the Crown Council. The members are to advise the monarch on matters of state. The Queen died Thursday at 96 at her Scottish country estate, Balmoral Castle.