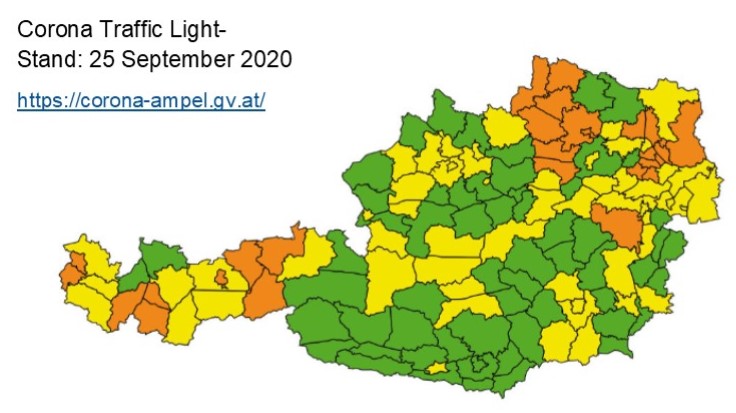 Vienna. The Corona Commission has – as reported – set the traffic light for ten more districts to orange. Among them five in Lower Austria, but also Austria’s top ski regions in the west: With Landeck and Schwaz two more are orange in Tyrol. This means: ski areas such as Ischgl/Samnaun, Kaunertal, St. Anton am Arlberg (district of Landeck) have again been downgraded to “high risk”.

Also the region Schwaz with the Zillertalarena, Gerlos, the Hintertuxer Gletscher, Mayrhofen. Even the ski area around the top World Cup and celebrity city of Kitzbühel is now no longer green but yellow (medium risk). In Vorarlberg two regions have been switched to orange by the commission.

No red at the moment in Austria. But if the Covid case numbers in the orange regions of the Alps continue to rise so rapidly, winter tourism is at stake. The number of new infections is simply too high.

For this reason, the German Minister of Health, Jens Spahn, has already warned against a winter vacation here. Belgium, the Netherlands & Denmark have also issued travel warnings.

Alarming. Last year, 78 percent of winter visitors came from abroad. In Lech am Arlberg there were even ski fans from 23 nations. There were 73 million overnight stays, 15 billion were turned over. Winter tourism is essential for all of Austria. At the Arlberg one counts in the meantime on a decrease in the winter of approximately 30 per cent: “Because simply fewer humans will travel”, so tourism director Hermann Fercher from Lech/Zürs (Vorarlberg).

ÖVP tourism minister Elisabeth Köstinger says: “The goal must be that we bring the infection figures back down and that the travel warnings will be lifted again.

Ski shock: Germany warns now of completely Tirol
Berlin/Bern. That is a heavy blow for ski tourism: Because of the strongly rising infection numbers our neighbor has also put the federal state Tirol on the red list. So far that applied to Austria concerning already for Vienna and Vorarlberg.

The Czech Republic and Luxembourg were classified as risk areas in their entirety. Thus from German view now 15 of 27 European Union countries are at least partly Corona risk areas, Spain, Tschechien and Luxembourg even completely. Poland is the only one of Germany’s nine neighboring countries that is not yet affected.

Swiss Confederation. After Vienna, Switzerland has now added Lower Austria and Upper Austria to the risk list. “Our goal must now be to bring the infection figures back down and to have the travel warnings lifted again,” says ÖVP Tourism Minister Elisabeth Köstinger.