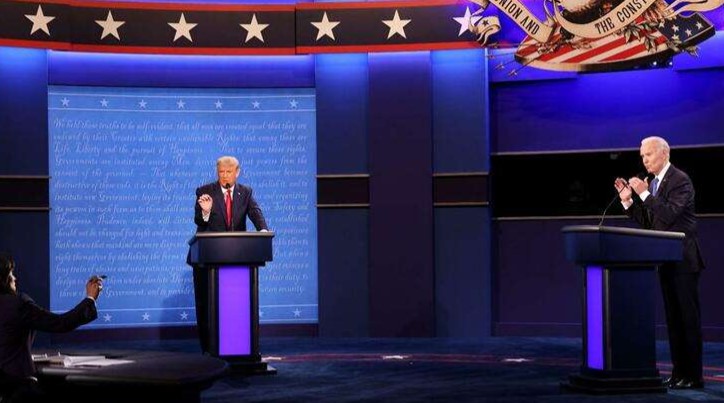 New rules made the second TV duel between Donald Trump and Joe Biden more civilized. The US president was put on the defensive on the subject of Corona.

So they had something to say to each other after all. In fact, during the TV debate of the presidential candidates on Friday night, there was an exchange of arguments at times. This was not possible without coercive measures: while one candidate was commenting on a new topic, the microphone of the other was muted briefly.

For the duel between Donald Trump and Joe Biden three weeks ago had sunk into chaos. Now the opponents met again in the studio in Nashville, Tennessee. For the last time in this polarized, heated election campaign, they stood side by side in the studio for 90 minutes. Five moments stood out in particular, they revealed a lot about the election campaign.

“A mask like this can save 100,000 lives,” said Joe Biden, holding up a black face shield. “I call on everyone to wear a mask”. With this gesture he clearly distinguished himself in a visual medium from Donald Trump, who almost never appears masked.

The U.S. Democrat was always strong when he could deliver simple but effective messages. “220,000 US citizens are dead. Everyone who is responsible for this should no longer be president of the USA,” he castigated Trump’s reaction to Covid-19, “This is the guy who told you at Easter and in the summer that the pandemic is over. More than 8.2 million people have been infected so far, with about 50,000 more getting infected every day.

The president was on the defensive on the most urgent issue of the time because the facts speak against him. “I myself had it, I am better, I am immune,” Trump said about his infection in early October. “The vaccination is coming,” the president promised in the studio, “we are reversing the trend,” in contrast to Europe, where the cases just went up again.

“The difference to Europe is that there they start at a low rate and we have always stayed on top,” countered Biden, quoting scientists. The democrat only stumbled when the sensitive issue of a nationwide lockdown was at stake. Biden could not and did not want to promise this – also because of concerns about a recession. The Covid Dialogue made it clear that Trump is clinging to old arguments, but can show no success. And regardless of who sits in the White House, the USA will have to struggle with the virus and a historic economic crisis for a long time to come.

“I think I have to answer that. May I? Thanks, I appreciate it.” Trump, who had interrupted Biden in the TV duel at the end of September 71 times, actually said that. He even spoke up with his index finger. A relatively civilized debate was thus possible.

Apparently Trump wanted to prevent the viewers from switching off again in a row, annoyed. Because on the election campaign stage Trump’s angry-bourgeois style may be appealing, but in a TV studio it quickly seems overexcited. Biden’s survey upswing had accelerated after the chaos duel in late September.

Trump was addressing the concerns of many people in the pandemic: “We won’t have a country anymore if we keep the country completely closed,” he said. “New York is a ghost town. The restaurants, the stores, they are dying. Should people eat in a Plexiglas cube in the future? The cure can’t be worse than the disease.”

Again and again he called his challenger “Joe” and looked over at Biden, but he stared straight ahead or shook his head. Just four days ago Trump had shouted to his cheering supporters at a rally that the Biden family belonged “locked away in jail.”

“What are you hiding,” Biden said at one point, pointing his finger at the president. The Democrat has been publishing his tax returns for more than two decades, but Trump’s finances remain hidden. As the “New York Times” described, the president, as an entrepreneur, is said to have paid only a few hundred dollars in taxes per year and accumulated debts with donors from all over the world.

Biden could easily score points with the topic, because Trump once again could not plausibly explain why he does not make his business relations more transparent. The excellent moderator Kristen Welker asked: “When do you publish your taxes? Trump evaded and replied: “I am treated worse than any other president.” This phase was the low point of the TV duel, because almost ten minutes were spent on alleged money flows to the Ukraine, Russia or China, different strands of accusations knotted together.

These were ten minutes in which one could have talked about hospitals, wages, food prices or mountains of garbage. However, the power of conspiracy theories should not be underestimated; in the current election campaign their influence is greater than ever.

It is important that the USA has good relations with international leaders, Trump emphasized. He left no doubt that this included his handshake meetings with North Korea’s dictator Kim Jong-un. “We also had a good relationship with Hitler before he invaded the rest of Europe,” replied Biden, underlining his promise that as president he would distinguish between dictators and democrats in his foreign policy.

When it came to foreign policy, the differences between the two politicians became particularly clear. Biden’s reputation as a multilateralist, who brings a great deal of experience in diplomacy, is something that many politicians abroad hope for. Trump had also pursued his “America First” approach to foreign policy during his term of office – and would intensify the tendency in the event of re-election.

A note in passing: Trump came to Germany at another time. When it came to climate protection, he repeated his claim that wind turbines “like the ones China and Germany have” are expensive, kill birds and release “more gases than fracking”.

In the final spurt to the election, Trump relied on a proven recipe from 2016: “I ran for you, because of Obama. Because you did such a bad job,” Trump said in the studio. As clumsy as the accusation may be, it partly explains why Trump is still popular with around 40 percent of US citizens. Because Biden carries political burdens of the past with him, he is vulnerable to failures of the Obama administration. Obama and his then deputy Biden, for example, did not succeed in a comprehensive immigration reform.

The Democrat now promised quick action in case of an election victory and attacked Trump for his radical anti-refugee course. 545 children who were picked up at the border would not have found their parents again until today. “This is criminal”. The sad exchange of blows was a reminder that in the USA, actually a nation of visionaries, the great challenges lie fallow.