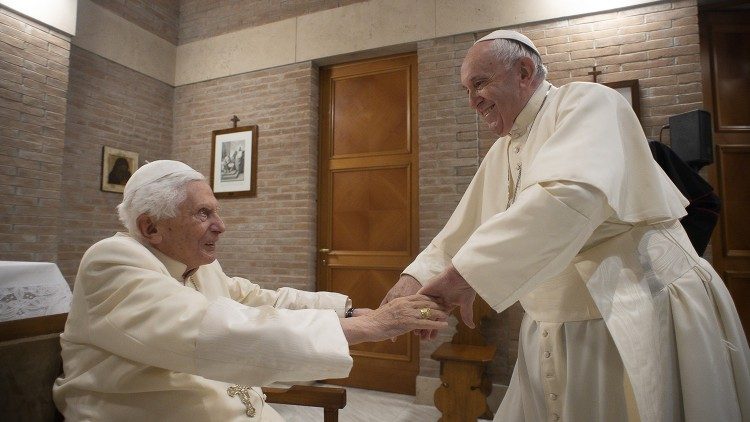 According to critics, several corona rules have been broken during the visit of newly appointed cardinals to the emeritus Pope Benedict XVI. Eleven new purple bearers went with Pope Francis to the monastery “Mater ecclesiae” in the Vatican Gardens on Saturday. It has been said that the cardinals, hardly any of whom wear a protective mask, keep little to no distance from each other. The pontiff even kisses the hands of his predecessor as if there was no pandemic at all.

Pope Franziskus, who very rarely wears a mask in public, had repeatedly urged in the past weeks in speeches to adhere to official regulations for health protection. In this respect, his own behavior has been and is sometimes criticized as not exemplary.

A Roman Catholic priest of a religious order named “Brother Paul” made fun of the Pope and his cardinals and spoke of a “slap in the face” of numerous senior citizens who have not been allowed to receive visits from their relatives for weeks. There was also the danger that these pictures might play into the hands of corona skeptics.

Benedikt’s secretary reassures: “All tested negative beforehand”.
In response to the numerous critics, Benedict’s private secretary Georg Gänswein emphasized on Monday that all cardinals had been tested negative for the coronavirus before their inauguration and the visit to the German ex-pope, who belongs to the risk group due to his age alone. According to media reports, cardinals such as the US American Wilton Gregory had spent last week in quarantine in the Vatican guesthouse Santa Marta. The food was also placed in front of their room door. They were not allowed to enter the dining room, where the Pope usually takes his meals. The ordered cardinal’s robes were also delivered to their quarters.

At the celebration of the Consistory (Cardinal’s Assembly) on Saturday, in accordance with the instructions of the Vatican authorities, all the participants except the Pope wore protective masks and sat much further apart. Only at the reception of the insignia of their cardinal dignity, red biretta, ring and certificate, almost all the appointed ones took off the mask before kneeling before the Pope. However, the usual embrace between pope and cardinals and between the cardinals themselves had been dispensed.

hp, with reports from news agencies and krone.at. picture: vaticannews.va