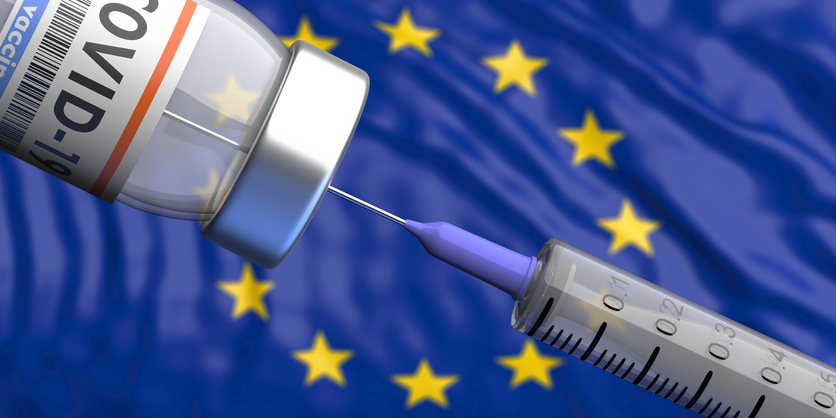 The Corona vaccine from U.S. pharmaceutical company Johnson & Johnson has a special feature: the drug only needs to be administered once. This sets it apart from the three vaccines approved so far in the EU, which require two doses. An overview of the differences and similarities between the agents.

How do the vaccines work?

The agents from AstraZeneca and Johnson & Johnson are so-called vector vaccines. A virus that is harmless to humans introduces information from the pathogen that causes the disease into the body.

In the case of Johnson & Johnson, the means of transport is a human cold virus that has been rendered harmless. It contains genetic material of a surface protein with which the pathogen Sars-CoV-2 docks onto human cells. The body cells of the vaccinated person produce this protein with the help of the built-in construction manual, and the body develops an immune response.

In contrast, the preparations from Biontech/Pfizer and Moderna are so-called mRNA vaccines. Here, the mRNA provides the blueprint for a component of the covid-19 pathogen. It enters the body’s cells with the help of tiny fat droplets. These then also produce the viral protein against which the body develops its immune response.

How well do the vaccines work?

Johnson & Johnson’s vaccine reduces the risk of contracting Covid-19 by 66 percent, or about two-thirds, as measured 28 days after administration, according to data from large Phase III trials. The risk of severe or life-threatening illness drops by 85 percent by that time, and no severe illness occurred from 50 days after vaccination.

AstraZeneca’s agent reduces the risk of disease by levels between 60 and 70 percent and also prevents severe to fatal courses with near absolute certainty. This vaccine is thus also capable of significantly reducing the burden of disease, and thus the burden on hospitals, in the pandemic.

The mRNA vaccines also protect against severe and fatal courses with near absolute safety. The general efficacy of the Biontech/Pfizer and Moderna agents against Covid-19 is approximately 95 percent no later than two weeks after the second dose.

Data from the field basically confirm the information from the studies. In Israel, where Biontech vaccine has been used predominantly, and in the United Kingdom, which has vaccinated a great deal of AstraZeneca, hospital admissions are declining sharply. Studies from Israel and the U.K. also suggest that the Biontech drug significantly reduces infections with the Sars-CoV-2 virus.

How often is vaccination given?

Johnson & Johnson’s drug only needs to be administered once. That’s simply because the company has tested its product accordingly.

In early studies, the pharmaceutical company also experimented with two doses 56 days apart. However, in the group of 18- to 55-year-olds, about a month after the single vaccination, more than 90 percent of the participants already had neutralizing antibodies against the coronavirus in higher concentrations in their blood. The group then relied on a single dose.

All three other vaccines approved in the EU were tested with two doses. With Biontech/Pfizer, the patient receives one dose at intervals of about three weeks. For Moderna’s product, it is around four, and for AstraZeneca, at least four weeks.

In a new study, AstraZeneca’s drug achieved up to 82 percent efficacy with a wider interval between doses. The World Health Organization (WHO) and the Standing Commission on Vaccination (Stiko) at the Robert Koch Institute (RKI) in Germany now recommend waiting twelve weeks before giving the second vaccination. People over 65 can now also be vaccinated with the drug.

The same preparation should always be used for both vaccinations. However, according to immunologists, a subsequent booster vaccination with a different preparation – for example, from vector to mRNA vaccine – is possible without any problems.

What are the side effects?

A distinction must be made here between serious side effects and so-called vaccination reactions. The latter occur when the body’s immune system comes to grips with the vaccine, and are thus desired to a certain extent so that the vaccination can take effect.

However, those who wish to be vaccinated against Covid-19 need to know that these reactions are much more common with both mRNA and vector vaccines than with classical vaccines based on attenuated viruses, for example. The reactions can be unpleasant, but they are not dangerous and disappear on their own.

The most common vaccine reactions to Covid-19 include pain at the injection site, fatigue, headache, joint pain, and chills. Some of the complaints occur in half of those vaccinated or even more. In most cases, however, the symptoms are mild to mild.

In much rarer cases, however, real side effects occur: According to the RKI, with the mRNA preparations, as with all other vaccines, “in very rare cases,” for example, allergic immediate reactions up to and including shock cannot be ruled out. For this reason, freshly vaccinated patients are followed up for 15 to 20 minutes. Allergic shocks can then be treated well.

In Denmark, moreover, vaccinations with the AstraZeneca drug have just been stopped because of severe cases of blood clots forming in vaccinated people. There was one death. However, it is still unclear whether the vaccination was the cause and is being investigated.

In general, side effects from vaccinations usually occur in the hours, days, weeks or months following administration. Serious problems should therefore be known by now for the vaccines already approved, even if they occur quite rarely.

The Standing Commission on Vaccination at the RKI also recommends vaccination for people with immune deficiencies – for example, in the case of HIV infection, cancer or after organ transplants.

Do the vaccines also protect against variants of the virus?

Initial tests by manufacturers Biontech/Pfizer and Moderna suggest that their vaccines also protect against the two variants initially detected in the United Kingdom and South Africa. However, the companies also found that vaccinated individuals appear to mount a weaker immune response against the variant from South Africa.

The AstraZeneca vaccine protects against the British mutant B.1.1.7, which is increasingly gaining the upper hand in Germany as well, but there are doubts about its effectiveness against the South African variant.

The vaccine could be adapted if necessary, Pfizer and Biontech said. Among other things, Moderna wants to test the effect of an additional booster dose. However, it is still unclear whether vaccine responses to the mRNA vaccine would be too strong with a third dose.

South Africa is now betting on Johnson & Johnson’s drug. In a study in South Africa, it reduced the risk of covid 19 disease by 57 percent, according to the manufacturer. How effective it is against the mutant alone, however, is unclear.

How are the vaccines stored?

A major advantage of the Johnson & Johnson and AstraZeneca products is that they can be stored for months at refrigerator temperatures of two to eight degrees Celsius.

In contrast, the Biontech/Pfizer vaccine is stored at around minus 70 degrees. However, according to recent information from the companies, it remains stable for two weeks even at minus 25 to minus 15 degrees Celsius. With the Moderna vaccine, it does not have to be quite so cold at around minus 20 degrees.

The EU Commission has concluded framework agreements with a total of six manufacturers for the supply of a total of about 2.3 billion doses of vaccine.