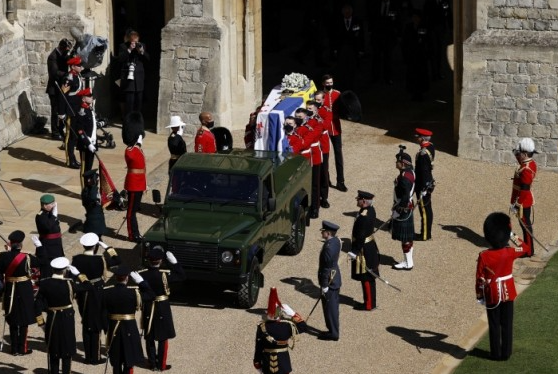 04/17/2021 5:14 pm – In a small circle and yet under the eyes of the world public, the British royals have carried Prince Consort Philip to the grave.

The royal family bids farewell to Prince Philip. Queen Elizabeth II and members of the Royal Family followed the coffin of the Prince Consort to the funeral service at Windsor Castle.
Nationwide, people remembered the Duke of Edinburgh, as Philip is known in the United Kingdom, with a minute’s silence.

The royal residence Windsor was widely cordoned off. Snipers posted themselves on house roofs. Because of the Corona pandemic, authorities and the palace had called on the public not to travel to Windsor and to watch the ceremony on television. Nevertheless, dozens of onlookers gathered outside Windsor Castle.

The relationship of the 36-year-old to the Royal Family had recently suffered greatly from the move of Harry and his wife Duchess Meghan to the U.S., as well as accusations of racism by the couple against the palace. The pregnant Meghan has remained in the U.S. on the advice of her doctor and followed the ceremony on television, as was heard.

Harry speaks to William and Kate after funeral service
Under blue skies and bright sunshine, Peter Phillips lined up between the two brothers, their cousin and son of Princess Anne. In this way, media speculated, the Queen wants to avoid visible tension between the brothers.

After the funeral service, brothers Prince William (38) and Prince Harry (36) were talking. On TV images was to be seen, as Harry at the exit of St. George’s Chapel at Windsor Castle first spoke with William’s wife Duchess Kate (39). When William joined, the three walked together – Harry with mask in the middle – across the grounds.

As the Queen joined the procession in her state limousine, the national anthem sounded. Representatives of the army marched in guard uniforms along the hearse. This was a Land Rover designed to Philip’s own specifications. Every minute the royal artillery fired a shot.

Motifs from seafaring in honor of Prince Philip
The ceremony was dominated by seafaring motifs in honor of Philip’s role in the Royal Navy. During his lifetime, the prince requested “Eternal Father, Strong to Save,” among others. The song is considered the anthem of the Royal Navy, in which Philip served during World War II and to which he always remained attached.