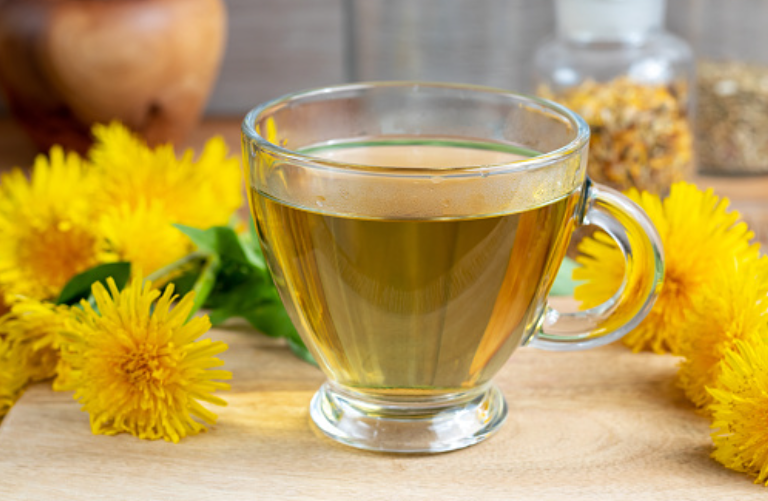 Like a dandelion, many adults still remember it from their childhood days. Not yet well known are the many health-promoting effects of the dandelion. Prepared as a tea, the plant is becoming increasingly popular.

Dandelion tea is obtained – unsurprisingly – from dandelion. This is also known by the technical term Taraxacum Ruderalia and belongs to the daisy family. Dandelion can reach a height of up to 30 cm and goes through various stages, ranging from a knotted bud to a rich yellow flower, to a delicate dandelion. The main flowering period of the plant in Europe ranges from April to May and also corresponds to the period when dandelion should ideally be harvested. During this period, dandelion is particularly aromatic, but also intensely colored, which is reflected in the golden hue of the infusion.

What ailments can dandelion tea help with?
Dandelion tea is recommended in phytotherapy and also in traditional Chinese medicine, especially for upset gastrointestinal tract and bladder and kidney problems. It is said to have a calming, antispasmodic, and detoxifying effect. Dandelion tea can support digestion, relieve an unpleasant feeling of fullness and flatulence. In addition, it has a detoxifying and diuretic effect due to its digestive and diuretic action. This is why dandelion tea is particularly popular during fasting and detoxification cures to support the detoxification process.

What are the active ingredients?
Dandelion tea is rich in flavonoids and coumarins. These sterols cause a biochemical binding of water and are said to improve blood circulation. Minerals such as potassium and the bitter substances eudesmanolide and tetrahydroiridentin B of the flowers catalyze the release of digestive hormones. In addition, the root of the dandelion contains numerous complex carbohydrates, but also insulin, which is why tea is also recommended for diabetics.

Since dandelion is also a widespread plant in Europe, its biochemical compositions are now widely researched. So is the digestive effect of the plant. According to studies, the prebiotic fiber inulin contained in the dandelion root has been shown to promote digestion, relieve constipation and contribute to healthy intestinal flora. In addition to the digestive and diuretic effects, the liver is also said to benefit from dandelion tea. Study results from a 2017 study suggest that the polysaccharides found in dandelion may help the liver function in its detoxification.1,2,3

Where can I get dandelion tea and how is it prepared?
Dandelion tea is readily available in many well-stocked supermarkets, as well as online. Since it has its strongest flavor during its blooming period and preferably shortly after harvest, it is recommended to buy seasonally and enjoy fresh dandelion tea, especially during the warm months.

For one liter of the delicious hot drink, one teaspoon of tea blend or just under five grams of fresh dandelion is boiled with hot water, allowed to steep for ten minutes, and then poured through a strainer. Dandelion tea hot or cold in the form of iced tea is a healthy and tasty alternative to classic herbal teas.

How does dandelion tea taste?
Dandelion tea tastes best when prepared from freshly harvested flowers. Since these have the most intense aroma shortly after picking, it is also advisable to pay attention to the harvest date when purchasing. Dandelion tea has, as usual for herbal teas, a bitter basic taste. However, it is characterized by a spicy note, which makes dandelion a popular spice in-home cooking and harmonizes well with potato and meat dishes.