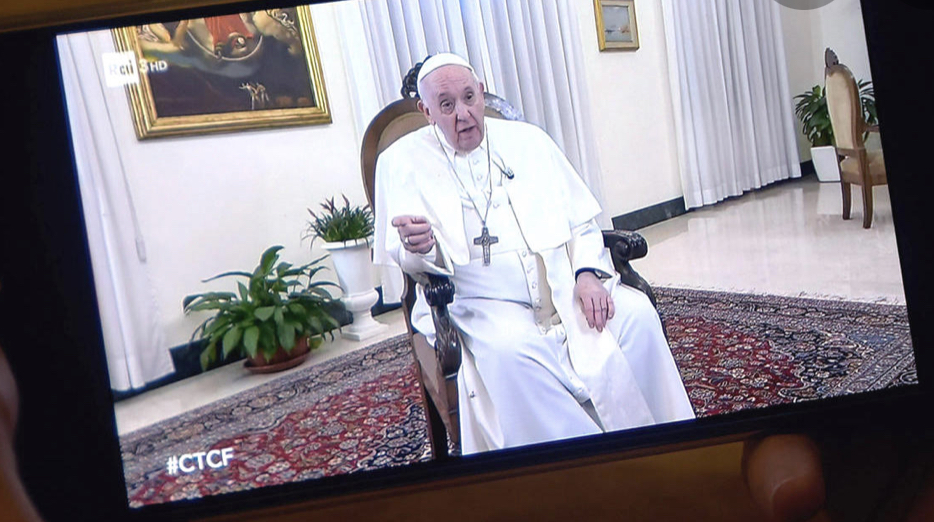 The pontiff speaks out again for the admission of migrants. But he also tells private things for the first time on a talk show.

Pope Francis has appeared as a guest on a talk show for the first time. The head of the Catholic Church spoke with host Fabio Fazio on the Rai channel for an hour Sunday night about migration and the crisis over Ukraine, but also about lighter topics such as his recent visit to a record store. Francis did not have to leave the Vatican for the interview; the conversation took place via video conference.

Francis has given interviews to Italian and foreign media several times since his election as pope in March 2013. However, this was the first time he answered questions on a talk show regularly watched by millions of viewers.

Pope makes an apparent demand
Francis reiterated his call to welcome migrants and integrate them into society on the talk show. “Every country must say how many migrants it can take in,” Francis said, urging more solidarity among nations for those hoping for a better life in Europe. “This is a domestic problem.” Asked about the tensions over Ukraine, the pope did not comment directly, only responding, “War is always destruction.”

In the interview on the program “Che Tempo Che Fa” (“How the Weather Is”), however, there were also light-hearted moments. When asked about his visit to a record store in Rome, Francis said he liked classical music as much as tango numbers. The Argentine-born pope joked that someone “who doesn’t dance the tango is not from Buenos Aires,” the Argentine-born pope joked.

He recalled childhood shopping with his mother and grandmother. “And there I saw a butcher who put in his pocket the money. That’s when I thought I wanted to be a butcher too – because of the money,” the pontiff recounted and had to smile. The 85-year-old had already told this anecdote a few years ago – at that time, however, what he liked about the butcher’s profession was that you could cut up pieces of meat with a large knife.