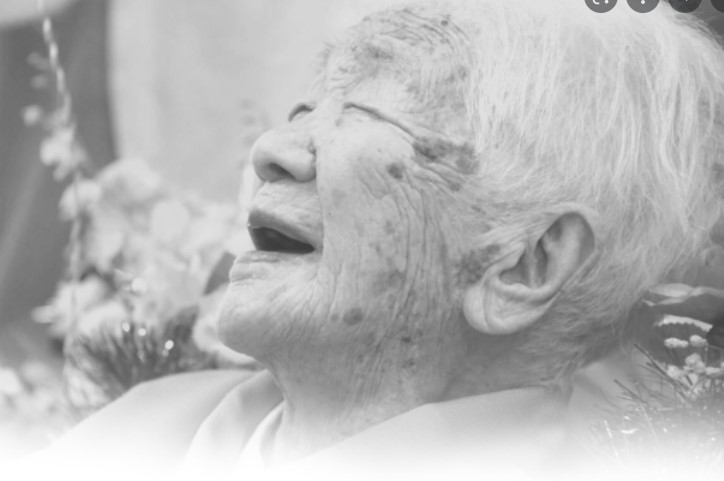 As announced by the local government of her hometown Fukuoka, located in southwestern Japan, Tanaka died already on April 19. According to the Gerontology Research Group, Frenchwoman Lucile Randon is now the world’s oldest person at 118 years and 73 days.

According to the Ministry of Health, Japan’s oldest person is now 115-year-old Fusa Tatsumi from Kashiwara in Osaka Prefecture. Tanaka was born on Jan. 2, 1903, as the seventh child, with eight siblings. In 1922, she married at the age of 19.

The couple had four children and adopted another. Tanaka supported the family by running a noodle store when her husband and eldest son went off to fight in the war against China, which began in 1937. After the war, the couple operated a rice cake business. Tanaka lived through the reigns of a total of five Japanese emperors. At the age of 116, the Japanese woman was recognized by the Guinness Book of World Records as the oldest person.

When asked about the secret to her long life, she cited “eating tasty food and learning.” Among her favorite foods was chocolate. Tanaka had a great passion for mathematics and the board game Othello even at a biblical age. According to the media, she got up at 6:00 a.m. and didn’t go to bed until 9:00 p.m.

The oldest person now, French nun Andre, lives in a retirement home in Toulon on the Mediterranean Sea, according to Kathpress, and survived a Covid 19 infection in January 2021. She has been considered the oldest living French woman since October 2017 and the oldest European woman since June 2019. Born Lucile Randon on Feb. 11, 1904, in Ales, southern France, Sister Andre lived through three French republics, ten popes, and the German occupation during World War II. She began working as a nanny at twelve and later was a homeschool teacher. Her employers included the Peugeot family of carmakers. It was not until 1923, at the age of 19, that she was baptized. In 1944, she entered the order of the Vincentian Sisters in Paris as a novice.

Since 2009, Sister Andre has lived in the home; Kathpress further reported that she is blind and sits in a wheelchair. She has experienced many wars and catastrophes – and instead of her physical ailments, she complains “that people cannot live in harmony.” In an interview for her 115th birthday, she told of her twin sister, who died in 2018, “She calls me, she pulls me. Pray for me that the good God will not make me wait too long. He’s exaggerating!”