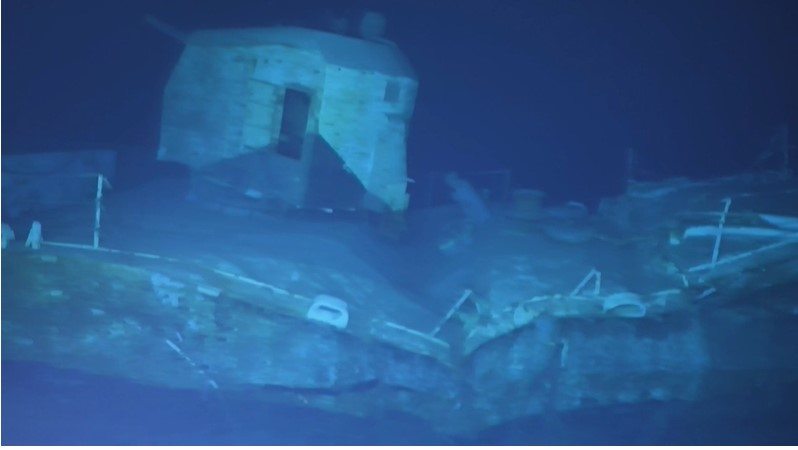 At a depth of almost 7000 meters, researchers have discovered the wreck of a U.S. warship sunk off the Philippine coast during World War II. The wreck of the “USS Samuel B Roberts” is the deepest wreck ever found, according to the US company Caladan Oceanic. For comparison: The wreck of the “Titanic” lies about 4000 meters in depth.

The battered hull of the ship, also called “Sammy B,” has now been filmed, photographed, and surveyed by a manned submersible during several dives, according to the Texas-based company. Among other things, the torpedo launcher and the gun mount of the ship can be seen.

“USS Johnston” outdistanced by about 500 meters.
“At 6895 meters deep, it is now the deepest shipwreck ever found and surveyed,” tweeted Caladan Oceanic founder Victor Vescovo, who piloted the submersible. “This little ship took on the best of the Japanese Navy and fought them to the finish.”

The battle off Samar was part of the more significant naval Battle of Leyte, in which the Japanese Navy fought the U.S. Navy for days to repel a landing of Allied troops in the Philippines. The “Sammy B” was one of four U.S. ships sunk on October 25, 1944. 89 of the 224 crew members died.

Until now, the “USS Johnston,” lying at a depth of almost 6500 meters, was considered the deepest shipwreck ever found in the world. Vescovo’s team had also reached it in 2021. The research team had recently also searched for the “USS Gambier Bay wreck,” which is suspected to be at a depth of more than 7000 meters, but in vain.