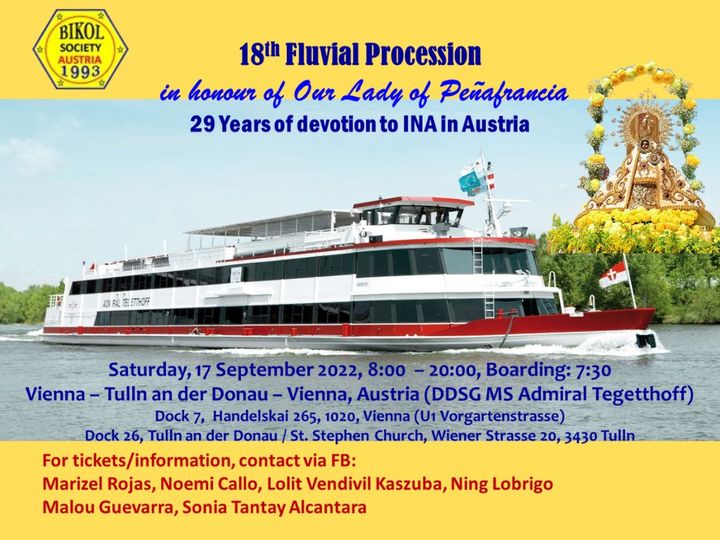 Among the Bicolanos and other devotees in Vienna, September is a time of intense religious celebration organized around devotion to Bicol’s patron, who her devotees endearingly refer to as Ina, or Mother.

The Peñafrancia festival has become an important marker of the Bicolanos here as they celebrate the 18th Penanfrancia Fluvial Celebrations in Austria. .the religious event will be held on 17 September 2022.

“We, the Bikolanos in Austria, brought this religious devotion to Vienna because we want to become instruments of faith among our “kababayans.” We want to spread the devotion to INA, which has brought meaning to the lives of several Filipino Marian devotees in Austria,” Marizel Rojas, the President of Bikol Society in Austria, said.

Now in its 18th year, the organization has been working hand in hand with the Filipino Catholic Community for a successful and meaningful Peñafrancia feast.

The organization aims to spread devotion to INA and celebrate memorable events. Peñafrancia celebration in Vienna begins with the usual nine days novena masses. After each novena, a festivity of Bikol delicacies, culture, and traditions is served.