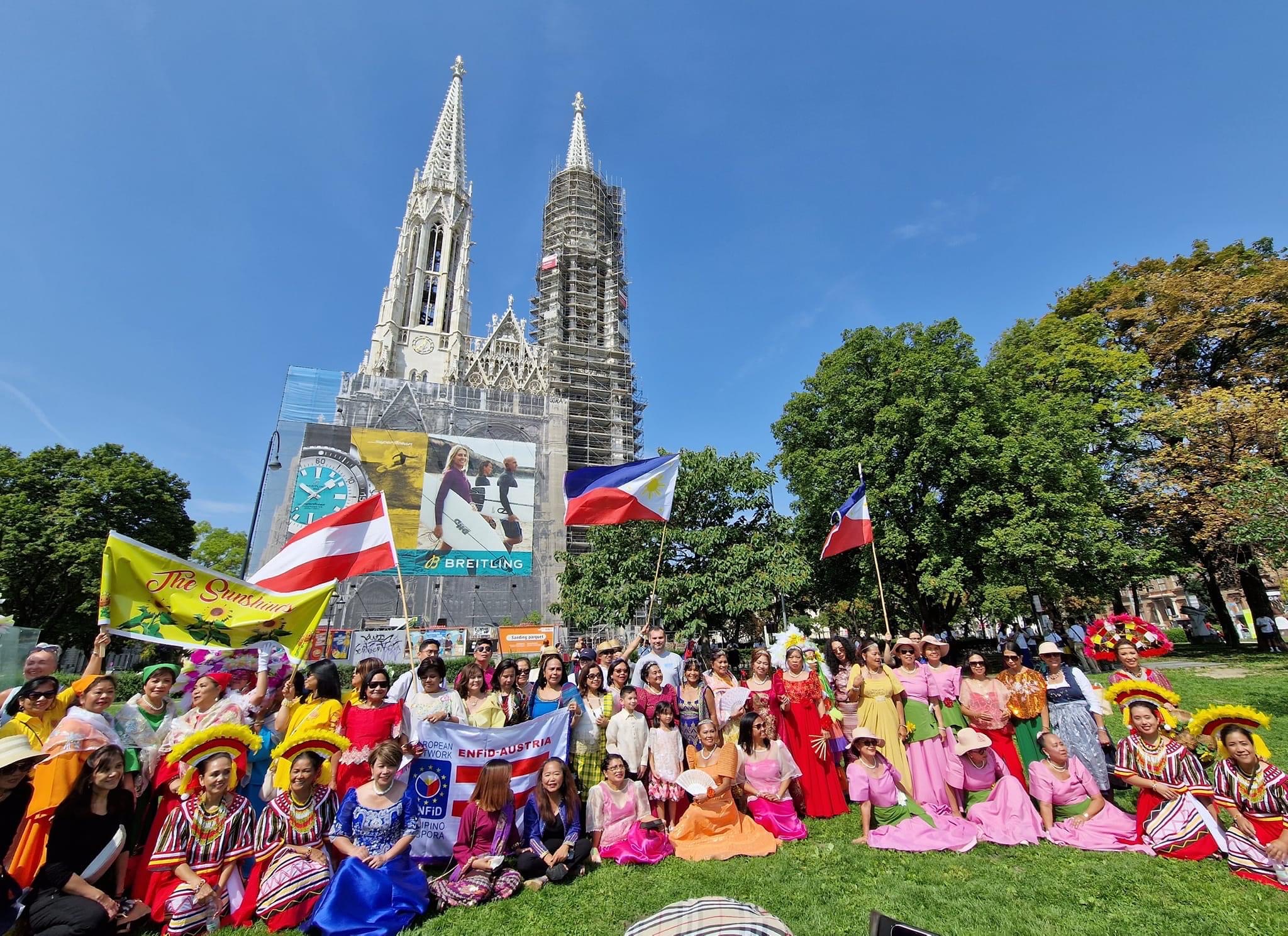 PAMANA (Heritage) parade that featured colorful festivals from the different provinces and islands in the Philippines was held on Saturday, 27 August 2022, at the center of Vienna. The march started at Stephansplatz. The occasion of the celebration is the establishment of diplomatic relations between Austria and the Philippines 75 years ago.

Hundred of Filipinos living in Vienna and from neighboring provinces and Austrian friends joined the memorable event. Bystanders were led to the rich, colorful cultures of the Philippines.

The Filipino festival parade began from Stephansplatz and passed through Graben, Schottengasse, and across the Ring to Sigmund Freud Park. Arriving at the grounds of Sigmund Freud Park, just in front of the Votivkirche, the participating organizations presented special dance performances.

“This year, we celebrate the 75th Philippine-Austrian relations. Today’s event manifests how we can promote our people-to-people ties by sharing the best of the Philippine culture. You have been treated to colorful pageantry of costumes, street dancing, rituals, and traditions of the Philippines, so I hope you have enjoyed the short parade. Everybody has prepared so much for this. We want to share this with the greater Austrian community. The Filipinos here in Vienna have been much appreciated, and we are well known for the hard work, dedication, and skills we have brought into the larger Austrian community. And today, we want to share with you the richness of  Filipino culture,” Charge d Àffaires Irene Susan Natividad said.

Rambak Youth representative Gabriel O. commented that the event is a chance to remember and strengthen his identity as a Filipino.

“We are here celebrating the Filipino and the diversity of the country’s different regions. We are celebrating being Filipino today!” Gabriel O. said.

The event reached a larger audience by going virtual and connecting with families across Europe and other parts of the world.

Zandrine Kocjan, Pinay Youtube Blogger and member of ENFID-Austria, went on live streaming throughout the parade and cultural presentations.

“It is a chance to demonstrate our Filipino culture worldwide and that Pinoys would come to learn about their heritage while watching the festival,” Zandrine said.

Other Pinoy Vloggers in Austria did also live streaming during the event.

“If we see more Filipino culture, we can feel more connected to our community, and I’m proud to be here,” said Yolanda Pascua-Isidro, a Pinay Viennese resident.

“I am pleased to be a part of this celebration of the  Austrian-Filipino friendship,” Austrian Wolfgang Paul Seehuber said.

“We are honored and privileged as IIonggos to participate and display our Ati-atihan festival in this meaningful parade. We are delighted that we are allowed to show this colorful fiesta tradition of Ilonggos here in Vienna,” Boy Torres, a Filipino Community leader, contended.

“Congratulations to the organizing committee. And I am very proud that our Pinoy culture is being shown in Austria,” added Wenie Sulit, a Pinay OP Nurse in Vienna.

Dieses Event gefällt uns sehr gut und wir sind glücklich dass wir eingeladen worden sind, mit dem steirischen Harmonika mitzuspielen. Danke schon,“  ( We appreciate very much this event and we are very thankful that we have been given the chance to play our instruments here.) Christina Lehner, member of the harmonica group said.

DI. Sharief Abdalla, President of the United Nations Correspondents Association Vienna, also graced the event. He thanked the event organizers for such a great show of the richness of Filipino culture.

“It is a well-organized event. It is great. I appreciate this colorful show of your culture,” “Matthias, a Hungarian guest, said.

Dr. Ernst Woller, president of the Viennese State parliament, expressed his gratitude to the Filipinos in Vienna, especially those working in the health sector.

“You have done so much in health service and diplomacy. Thank you all for supporting the Austrian and Viennese community,” Mr. Woller said.

“We are delighted that you are here today. We are celebrating the culmination, the end of one year of our love story with Austria, the 75th Austria-Philippines relations,” Marizel Rojas announced.