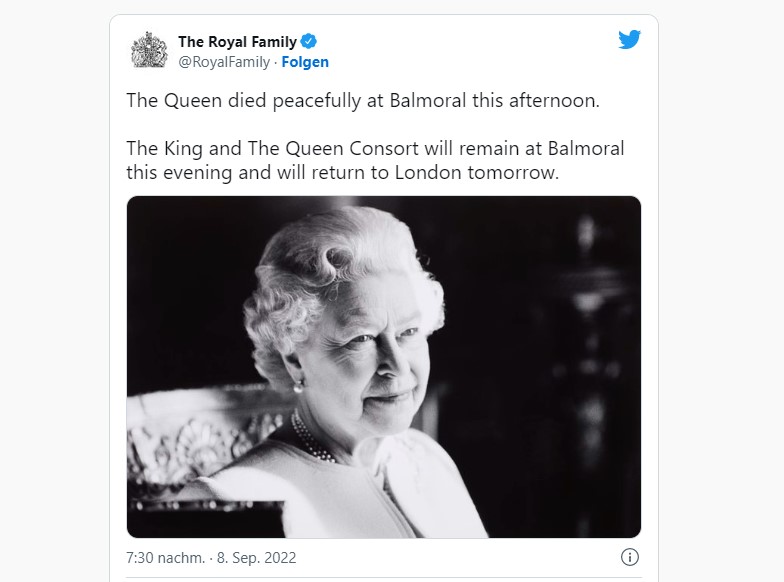 Britain’s Queen Elizabeth II is dead. The palace announced that the Queen died peacefully at her Scottish country residence, Balmoral Castle, on Thursday at 96. Elizabeth II was on the throne longer than any other British monarch. She was head of state of Great Britain and Northern Ireland and more than a dozen other countries, including Canada, New Zealand, and Australia. Her death marks the end of an era.

“Deeply, we mourn the passing of a cherished Highness and much-loved mother. I know her loss will be felt – across the country, in all areas of the Commonwealth, and for countless people in the rest of the world,” King Charles announced via Twitter.

Hundreds of people had gathered outside the Queen’s official residence in London before the announcement. Many sang the national anthem and cried when the flag was set at half-mast.

Funeral in ten days?
Years ago, detailed plans were made for what would happen after the Queen’s death. According to the Association of the Foreign Press in Great Britain, a state funeral is expected ten days after the death.

It was already hinting that Thursday afternoon, her doctors announced that the Queen was in poor health. After a further assessment this morning, they “recommended that she remain under medical observation,” a palace spokesman said, and the royal family rushed to see her. However, the Queen was still feeling well and would remain at her country residence, Balmoral Castle, it was said at the time.

The reactions of British officials indicated that the Queen’s situation was more serious. For example, the new Prime Minister Liz Truss already spoke on Twitter that the “entire country will be deeply concerned” about “the news from Buckingham Palace.” “My thoughts – and those of people across the UK – are with our Majesty the Queen and her family at this time.”