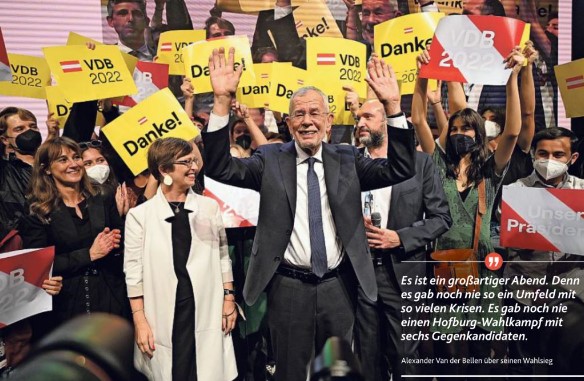 According to the Ministry of the Interior, the final result of the federal presidential election is available. Alexander Van der Bellen was re-elected with 56.7 percent. Walter Rosenkranz (FPÖ) came in second with 17.7 percent.

Van der Bellen remains the eighth head of state since the introduction of direct elections in 1951, having prevailed over his six competitors in the first round of voting on Oct. 9. The former Green Party leader, who ran as an independent in 2016 and 2022, is Austria’s first federal president not nominated by the SPÖ or ÖVP. At 79, when he was sworn in on Jan. 26, he was the oldest incumbent.

Rosenkranz (FPÖ) was the only opposing candidate this year who was nominated by a parliamentary party and could thus count on its financial and organizational support in the election campaign. The five others were representatives of smaller parties or private individuals.

The postal votes benefited Wlazny in particular. Based on the results of the ballot, the latter overtook Wallentin nationwide. In his hometown of Vienna, Wlazny even came second with 10.7 percent of the vote, ahead of Rosenkranz with 10.4 percent. However, the strongest candidate in the capital was Van der Bellen, who received 65.4 percent of the vote there, including postal votes (after an election result of 62.9 percent).