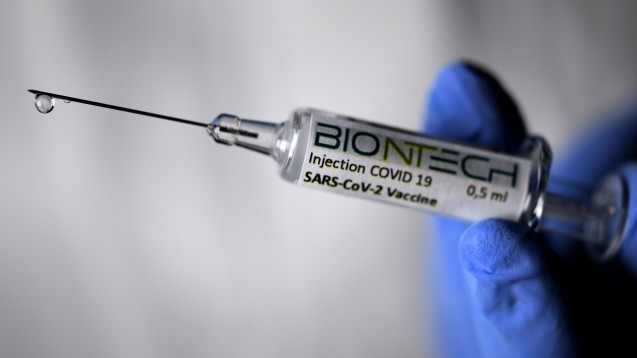 According to a recent study, the Pfizer-Biontech vaccine probably also protects against the B.1.351 virus variant first identified in South Africa – although the number of antibodies formed against it is probably lower. This was reported by a research team in the “New England Journal of Medicine”.

They had tested in the laboratory to what extent viruses with different mutations can be neutralized with the blood serum of vaccinated persons. In the variant, the number of neutralizing antibodies was lower, and the neutralization rate of the vaccine was reduced by about two-thirds.

Exact effect still unclear
It is still unclear exactly what effect this has on the effect of the vaccination against the virus variant, write the scientists from the University of Texas Medical Branch. The amount of antibodies formed is not the only important factor in the protective effect of a vaccine; the immune system shows other protective reactions after vaccination, such as the formation of T cells.

“To date, there are no clinical data to suggest that the South African virus mutant is not covered by vaccine-induced protection against covid-19,” a statement from Biontech and Pfizer said of the study results.

However, they are monitoring developments and preparing to develop an adapted vaccine or booster vaccine should a variant emerge against which the vaccine does not provide adequate protection.