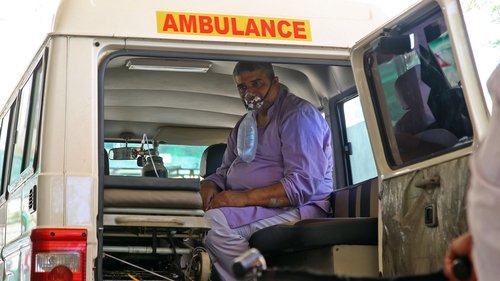 India has recorded more than 400,000 new infections with coronavirus in one day. During the same period, more than 3,500 people died in connection with Covid-19, according to figures released today by the Ministry of Health. Hospitals and crematoriums are overcrowded. The South Asian country of more than 1.3 billion people lacks medical oxygen, medicines and vaccine doses.

And this despite the fact that India is one of the largest vaccine producers in the world. For days, India has been breaking bitter records of its own: according to the ministry, there were a total of 401,993 new coronavirus infections. This marked the ninth consecutive day the country has reached a record high. More than 19 million people have been infected there since the pandemic began. With nearly 212,000 deaths, India ranks fourth in the world behind the United States, Brazil and Mexico.

According to a government plan, all adults should be allowed to be vaccinated with immediate effect. However, several Indian states reported that they were running out of vaccine doses or had already run out. Previously, only those over the age of 45 were eligible for vaccination. About ten percent of them have reportedly received at least one vaccine dose so far.

International pledges of support
Several countries, including Germany, the United States, the United Kingdom, Japan and also Austria have pledged support to India. A first batch of the “Sputnik V” vaccine, which had recently been licensed in India, was delivered from Russia.

African Union increasingly concerned
In view of the dramatic CoV situation in India, meanwhile, the African Union is showing increasing concern: The health system, which is equally fragile in many African countries, could also collapse, warned the Africa CDC health authority. This is due on the one hand to similarly weak structures – and on the other hand to India’s vaccine production.