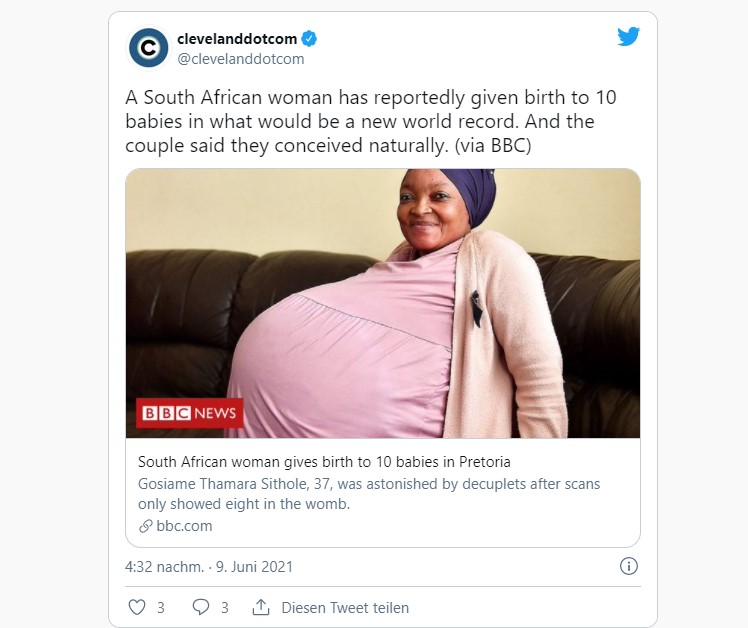 The 37-year-old mother of ten had actually expected “only” eight babies – two came as a surprise afterwards. If the case can be officially confirmed, the South African woman will be the new world record holder.
The previous record for the most healthy babies is held by a woman from the USA, who had eight in 2008. Nadya Suleman, dubbed “Octomum” by the media, has now held the title for 13 years without anyone attempting to challenge her. But now the auditors from the Guinness Book of World Records are having to work overtime, because two mothers could have earned it. Just recently, a woman from Mali allegedly gave birth to nine babies, all of whom are doing well. However, the case has yet to be confirmed. And now, according to media reports, a woman from South Africa even became a mother of ten!

Father also ‘overjoyed’ after incredibly difficult pregnancy
The ten children were born on Monday at the age of 29 weeks by Caesarean section in a hospital in Pretoria, as “Pretoria News” reports with reference to the family. According to the report, the parents urgently need support to equip their mega-family. According to the newspaper, the presumed record holders, who are already parents to twins, were interviewed as early as May, but postponed publication of the interview statements until after the birth out of consideration.

The South African newspaper quoted the father of the ten children: Tebogo Tsotetsi was “overjoyed” and could not say much, he told shortly after the birth. His seven sons and three daughters are all well, the proud dad said. Regarding his wife’s pregnancy, Tsotesi said it had been very difficult: “She was seven months and seven days pregnant.”