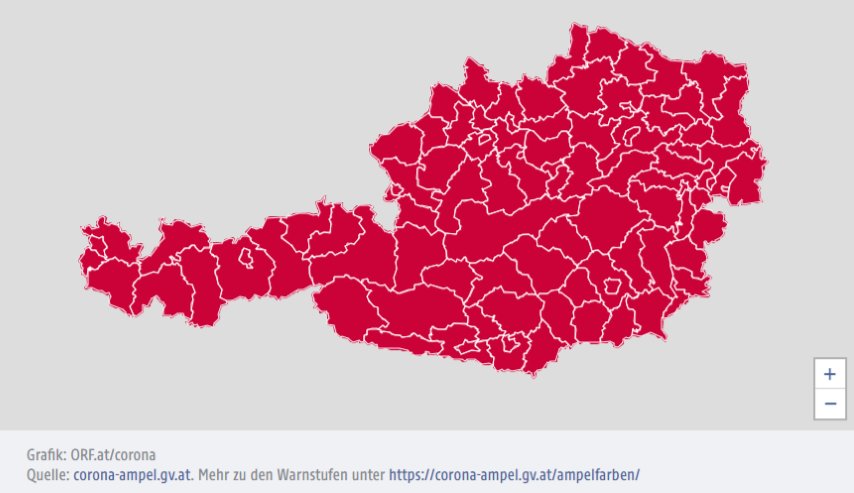 All of Austria remains deep red on the CoV traffic light, i.e. in the maximum risk range. This emerged from the meeting of the responsible commission yesterday afternoon. The committee sees “the medical care of the Austrian population in large parts of the country seriously threatened”. The announced vaccination obligation is expressly welcomed, likewise third sting and child inoculation. Measures in the school sector are seen only as a “last resort”.

The Commission recommends pushing “booster vaccination”, which could make a significant contribution to curbing the current wave. In view of the recommendations now made by the European Medicines Agency (EMA) and the National Immunization Panel (NIG) on the vaccination of children aged five and older, it is also suggested that vaccination programs be set up immediately specifically for this group.

For some weeks now, however, the decisive factor in terms of color has been the risk figure, which also includes factors other than pure case statistics. Here, the age structure of the infected persons and their vaccination status are taken into account. The red zone of very high infection risk begins at 100.

All provinces clearly exceed this mark. Despite an increase, Vienna, with just under 293, continues to have the best figure, ahead of Burgenland with 357, although the risk figure there has fallen, as in Upper Austria and Salzburg. Tyrol continues to have the worst figure with 2,204, followed by Vorarlberg with 1,777, for which, as for Lower Austria, a very high risk is forecast in intensive care units – a gloomy scenario that already applies to Upper Austria and Salzburg.

There is nothing new from the school traffic light. Here, all federal states remain in the highest risk level three.