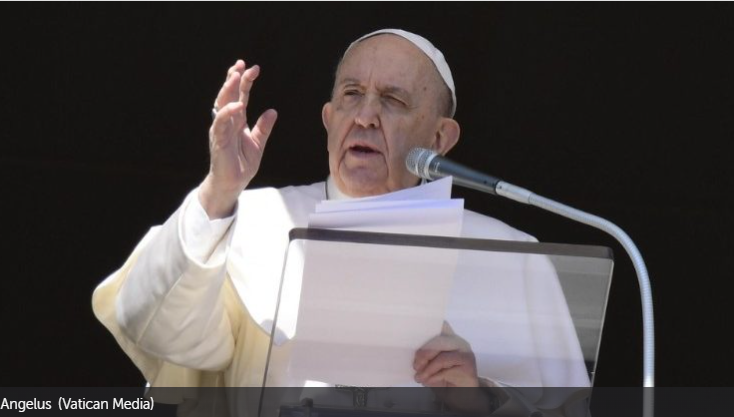 Pope Francis is horrified by the news and images from the Ukrainian city of Mariupol, besieged by Russians. At the Angelus prayer this Sunday, he spoke of “barbarism.“

“The only thing that must be done is to put an end to unacceptable armed aggression before it turns cities into cemeteries,” the Pope said verbatim. Once again, he spoke out in favor of negotiations and truly safe humanitarian corridors for civilians. “In the name of God, I ask you: stop this massacre!”

Francis thanked all those working on behalf of Ukrainian refugees. “God is only a God of peace, he is not a God of war, and those who support violence profane his name.”

we have just prayed to the Virgin Mary. This week the city that bears her name, Mariupol, became a martyr city in the brutal war raging in Ukraine. In the face of the barbarity of the killing of children, innocent people, and defenseless civilians, there are no valid strategic reasons: The only thing that needs to be done is to end the unacceptable armed aggression before it turns cities into graveyards.

With sadness in my heart, I join the voice of the ordinary people asking for an end to the war. In God’s name, hear the cries of the suffering and let the bombings and attacks stop! Let us truly and firmly focus on negotiations and ensure that the humanitarian corridors are efficient and safe. In the name of God, I ask you: stop this massacre!

I want to call once again to welcome the many refugees in whom Christ is present and give thanks for the incredible network of solidarity formed. I ask all diocesan and religious communities to create more moments of prayer for peace. More moments of prayer for peace. God is only a God of peace; he is not a God of war and those who support violence profane his name. Let us now pray in silence for those who suffer and that God may convert hearts to a firm will for peace.”