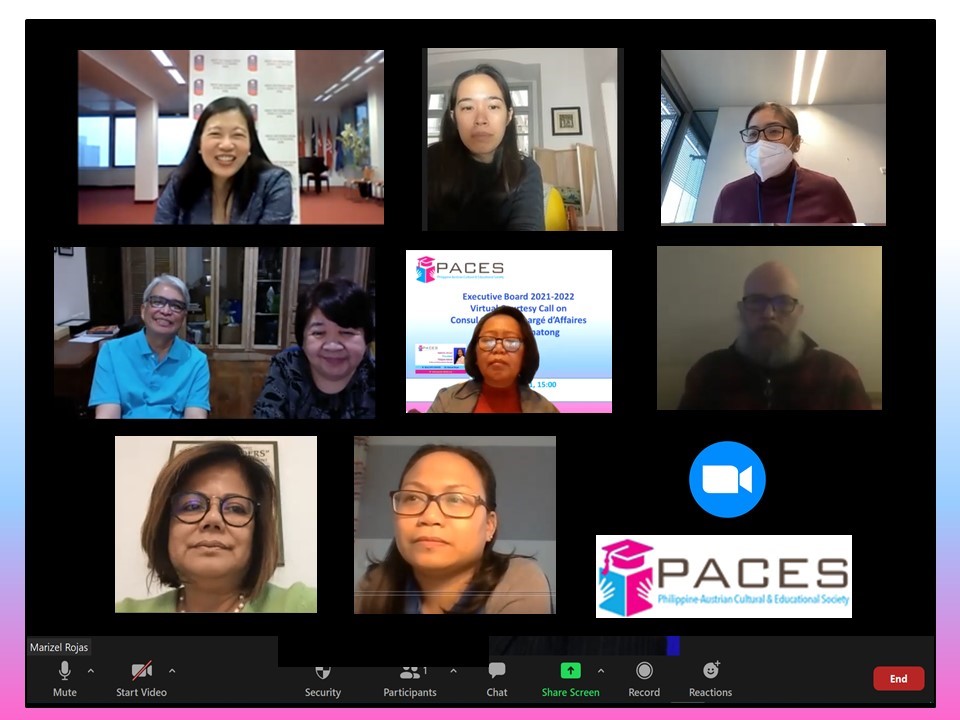 Ms Rojas presented background information on the PACES, presenting the FACES behind PACES as well as the 2020 activities undertaken and highlighting recent accomplishments as well as laudable legacies. With the STEMS70 Scholarship Programme launched in 2017, four scholars in the Philippines were able to fulfil their dreams of finishing their college degrees. PACES, a young organization as it it is, established on 16 May 2016 has an established social media platform and web presence through it website and Facebook site. Most important of all, with the Cooperation Agreement with Jugend Eine Welt concluded on 20 July 2020 (https://en.jugendeinewelt.at/ ), sponsors and donors can now receive tax exemption certificates, as needed.

The plans for the biennium 2021-2022 plans were discussed by VP1 Priscila Confiado. She elaborated on the annual events, most notable of which is the Floral Offering at the Rathaus on the occasion of the Philippine National Day, signature events such as the lectures and a milestone events such as the STEMS75 Scholarship Programme launch and an Anniversary Ball this year. VP1 Confiado also described the fruitful ongoing partnership with the Couples for Christ (CFC) Answering the Cry of the Poor (ANCOP) Foundation. Furthermore, she informed about the strategic fundraising campaign which will be undertaken by the Funding Committee in collaboration with the Scholarship and Membership Committees, an important component of which is a grassroots fundraising known as #10forSTEMS. For an amount as small as 10 EUR per month, donors can help support our scholars. Concluding her report, she declared her belief that “education is the silver bullet for development in the Philippines.”

For information on how pledge #10forSTEMS, visit the PACES website: http://www.paces-stems.org/

The ensuing discussion revolved on the collaboration between the PE and PACES, especially on activities related to the commemoration of the 75th Anniversary of Philippine Austrian Diplomatic Relations. According to CDA/DCM ConGen Amatong shared the good news that the 75th Anniversary logo has been approved, and that there will be a joint launch of the logo by the PE in Vienna and the Austrian Embassy in the Philippines in March. She further informed that the theme of the celebration is “Pinagbuklod ng Kasaysayan Pinagyaman ng Agham”/ “Bound by History, Continuously Enriched by Science”. As its contribution to the anniversary, PACES informed about a planned STEMS75 launch/75th Anniversary Ball in September or October, subject to the existing CoViD-19 pandemic restrictions.

HE Ambassador Sulpicio M. Confiado, Ambassador Extraordinary and Plenipotentiary to the Arab Republic of Egypt with concurrent jurisdiction over the Federal Democratic Republic of Ethiopia, the State of Eritrea and the Republic of the Sudan, PACES Honourary Member, also joined the meeting and shared some updates about PE activities in Cairo.

CDA/DCM ConGen Amatong thanked PACES for initiating and organizing the meeting and apprising the PE of its two Year Plan (2YP-2021-2022). She reiterated the PE’s commitment to work closely with PACES as has been the case during the past years and looks forward to supporting PACES and receiving PACES’ continued support for PE programmes this year and the years to come.

PACES President Marizel Rojas ended the meeting by sharing the PACES in a MINUTE video, a short introduction on the work of  which can also be viewed via youtube: https://www.youtube.com/watch?v=_dhjvZ5_PHU