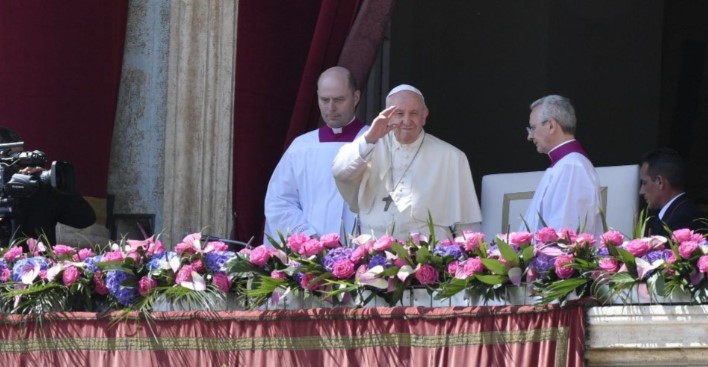 In front of tens of thousands of people, Pope Francis gave the “Urbi et Orbi” (“to the city and the world”) blessing in St. Peter’s Square in Rome on Easter Sunday. The faithful, who returned to the celebration after the two Corona cancellations in 2020 and 2021, followed the ceremony in St. Peter’s Square in spring weather. The Holy Father made an urgent appeal for peace in Ukraine.

“Our eyes are skeptical in this Easter of war. We have seen too much bloodshed, too much violence. Our hearts have been filled with fear and terror, while so many of our brothers and sisters have had to protect themselves from the bombs,” Francis said.

“Grant peace to long-suffering Ukraine, which has suffered so much through the violence and destruction of the cruel and senseless war into which it has been dragged. May the new dawn of hope soon rise over this terrible night of suffering and death! May peace be chosen.

According to the Vatican, stop flexing your muscles while people are suffering,” the Pontiff Maximus told about 50,000 faithful.

All the many Ukrainian victims, the millions of refugees and internally displaced persons, the families torn apart, the elderly left alone, the lives destroyed, and the cities razed to the ground, I carry in my heart.

Before my eyes, I have the gaze of the orphans fleeing war. When we look at them, we cannot help but hear their cry of pain,” the Holy Father said.

Praise to people who welcome refugees.

Amid the pain of war, he said, there is no lack of encouraging signs, such as the open doors of many families and communities that welcome migrants and refugees throughout Europe. “May these many acts of charity be a blessing for our society, which is sometimes degenerated by so much selfishness and individualism. May these acts help make society welcoming to all,” Francis stressed.

Pray for peace between Israelis and Palestinians

The pope also spoke about the situation in the Middle East, which he said has been torn by division and conflict for years. He prayed for peace in Jerusalem. “May Israelis, Palestinians, and all residents of the Holy City, together with pilgrims, experience the beauty of peace, live in fraternity, and may be granted free access to the Holy Places with mutual respect for the rights of each,” the pope said.

Peace for regions from Lebanon to Syria

The pontiff urged peace and reconciliation for Lebanon, Syria, Iraq, and all Christian communities living in the Middle East. He also prayed for the end of tensions in Libya and Yemen. The Pope expressed concern about the situation in Myanmar and Afghanistan, where “a tragic humanitarian crisis is tormenting the population.” He also expressed solidarity with populations affected by devastating floods in eastern South Africa.