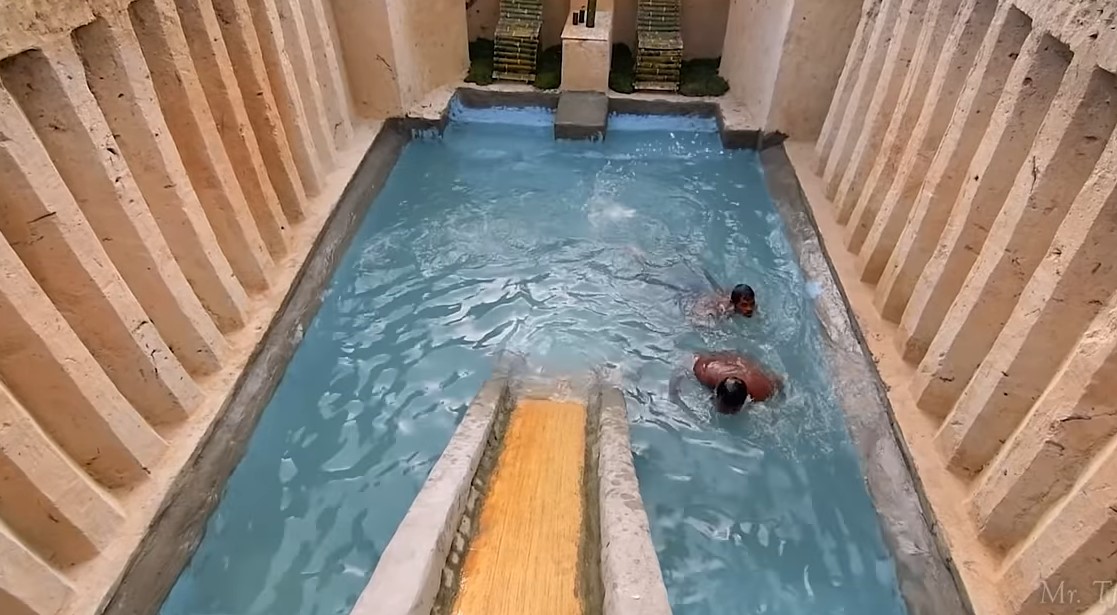 On YouTube, videos achieve millions of clicks in which, for example, jungle dwellings with a pool are built in supposed manual labor.

The keywords that are supposed to arouse interest are usually all in the title: Primitive, Building, Underground, Swimming Pool, House, Villa. What happens in the YouTube videos can be described across the board as follows: 2 men wearing only shorts plan a structure in a jungle clearing, dig large pits with simple tools from loose yet load-bearing soil, strengthen and paint their natural design materials, eat freshly caught animals in between, pipe water into the construct from somewhere, and then enjoy their work.

The film is shot in fast motion, with significant jumps between construction phases using only physical strength. Almost nothing is spoken; if it is, you only hear a squeak distorted by the speed.

Successful and mysterious
There are now hundreds of videos of this kind. They always follow the same pattern and have enormous success. Many have views in the triple-digit millions. But who is actually behind these contributions? Why are they so uniform? Where do all these skilled and architecturally gifted jungle dwellers come from? And what happens to their buildings, which were supposedly painstakingly created over months of manual labor?

Many Asian-looking video makers give their residence as the USA, although “The United States of America” or “California City” make one slightly suspicious. The natural home seems to be thousands of miles away in Southeast Asia. The website Coconuts Bangkok did intensive research three years ago and concluded that most of the videos originate in Cambodia. There, a whole video-making scene seems to have formed that produces content continuously and earns comparatively well by local standards.

Origin of “Primitive Technology
John Plant is unanimously identified as the origin of the “Primitive” videos currently found on YouTube. The Australian started filming himself 7 years ago making tools, traps, baskets, stoves, and huts with his bare hands – dressed only in shorts – in a forest in northern Queensland. His YouTube channel, Primitive Technology, soon had a loyal following. On his blog, he provides instructions on how to recreate his constructs.

The appeal of the videos, according to experts*, is to show the possibility of making things on your own in a natural, primitive environment. “Most of us realize we couldn’t survive without the collective work of many strangers,” the BBC quotes University of Texas psychologist Art Markman as saying. “Also, we live in uncertain times. If you distrust institutions, you might like to be able to do things yourself.”

Watching John Plant implement his projects in the woods makes many people want to do their crafts. The more primitive the object, the more feasible it seems.