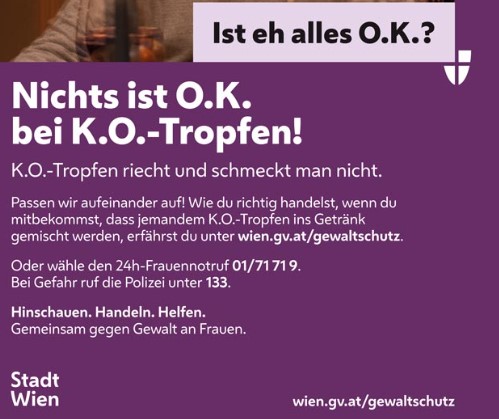 Anyone who suddenly loses consciousness while socializing in a bar, at a party, or a celebration in their private surroundings may have had so-called knockout drops mixed into their drink.
Women, particularly, are affected, and the numbers have risen recently. The City of Vienna is now launching an information campaign to raise awareness of the danger and to provide information on what to do if a suspected case has occurred.

“Nothing is OK with knockout drops”.
Victims often lack memory for a few hours. They sometimes wake up in strange places; missing clothes or pain in the abdomen indicate sexual assault. But robberies have also been reported. The slogan “Nothing is OK with K.O.-Tropfen,” is now called for attention and civil courage. TV commercials, free cards, and city lights draw attention to the problem. Beer mats with the inscription “Halt! Your glass always tight!” are put up in pubs.

“Violence against women is unacceptable,” Vienna Women’s City Councilor Kathrin Gaal (SPÖ) made clear at the campaign presentation. What is dangerous about the substances, she said, is that they can hardly be tasted or smelled in combination with alcohol. That is why it is essential always to take care of your drink, Gaal explained. This is also recommended in familiar surroundings, he was assured today. Advised also to contact friendly people or bar staff in case of sudden dizziness or nausea.

“The more informed you are, the better you can protect yourself or others,” the women’s spokeswoman of the Vienna NEOS, Dolores Bakos, also expressed her conviction. For example, she said, if you see a woman who is no longer responsive being carried out of a club by a man, you can inquire about the closer circumstances. The problem, he said, is often that women are also unsure when something has happened. Again and again, they are also accused of increased alcohol consumption, Bakos pointed out.

The city’s 24-hour women’s emergency hotline is available for information on the subject at 01/71719. Its director, Heidemarie Kargl, reported an increase in the number of cases handled by the helpline. This year, about 60 women have already called. In 2021, there were 40 cases; previously, approximately 20 points had been registered annually.

Cases in the private context are increasing
“However, the number of unreported cases is very high,” said Kargl. It is increasingly noticeable that cases in private contexts are on the rise. Invitations from acquaintances to the apartment or the first date are situations where the administration can take place. Above all, he said, it is essential to get to the hospital quickly because otherwise, the traces of the drops are difficult to detect.

“It is a very perfidious crime,” also warned state police president Michael Lepuschitz. It is important to call the police immediately if something seems suspicious.